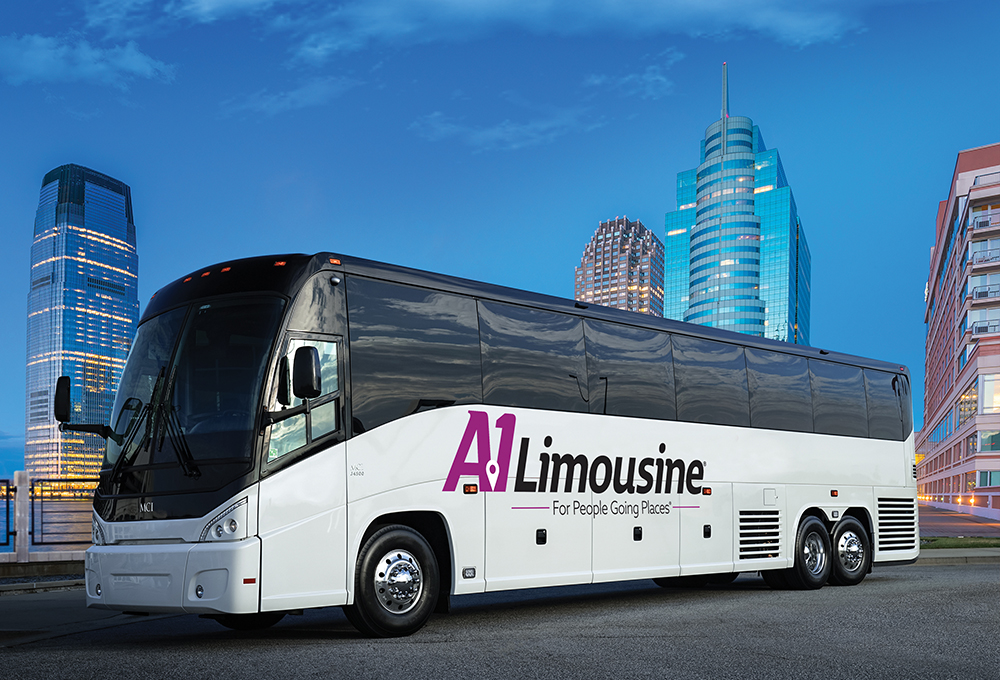 MCI J4500 motorcoach branded for A-1 Limousine Des Plaines — Motor Coach Industries (MCI), a U.S. subsidiary of NFI Group, has announced that A-1 Limousine will round out its 20-coach fleet with two 2019 MCI J4500 coaches and two all-new 2019 MCI J3500 coaches. These coaches mark the return to the luxury 35-foot coach market for the Princeton, N.J.-based company. One of A-1’s newest J4500s was the featured MCI coach in American Bus Association (ABA) Foundation Live Auction at ABA Marketplace Jan. 25-29 in Louisville, Ky. Proceeds from the auction event benefit the ABA Foundation’s scholarships and motor coach travel and tourism research.

A-1 President Jeffrey Starr, president of A-1, planned to bid on the newest J4500 at ABA “before I walked in the door,” noting that “I already knew the model’s features and value and won.” The son of founders Michael and Marilyn Starr, Starr helped the family business expand from traditional limousines and vans into motor coaches in the 1990s as corporate clients began asking for ways to move larger groups.

“Every transportation company owner-operator can agree that an out-of-service vehicle is not only detrimental to the business financially, but we are also unable to meet the needs of our customers,” said Starr. “I’ve always counted on MCI for parts and now under NFI Parts, service is even better.” A-1’s newest coaches, scheduled for delivery later this year, also have Starr looking forward to MCI’s new 35-foot era.

MCI Vice President of New Coach Sales Pat Ziska, says: “We’ve been very proud to help A-1 build this business. Successful limousine operators like A-1 helped us realize that it was time to re-enter the 35-foot coach market with the creation of our new J-Series.”

“MCI builds great buses,” added Starr. “The 2019 J4500 and J3500 designs are fantastic. From the turning radius features on both models to the redesigned spacious interiors for maximum seating capacity, MCI coaches are intelligently engineered.”

A-1 is taking its new J4500 coaches in a roomy 60-seat configuration and its two J3500 with a 44-seat layout. All four coaches will also carry optional programmable multicolor interior lighting and Advanced Driver Assistance Systems (ADAS) that help drivers prevent incidents in highway and local traffic.

These four new J3500s will replace the company’s longtime “F coaches” built by MCI in Mexico more than 20 years ago, and will support a fast-expanding coach business, explains Starr. With nearly 130 mini-buses, vans, and sedans, the company is electing to grow their coach fleet “with a goal of refreshing our motor coaches with two new coaches every few years because that side of our business is really growing,” he explained.

A-1’s culture of personal service and schedule, time-keeping management has made it particularly adept at managing large group travel.

Starr recalls the time his business was responsible for transporting 700 students to an event in Philadelphia that required 175 motor coaches (sourced with nearby operators) with pinpoint drop-off and pick-up schedules of less than a half-hour. A-1 managed it all by placing 30 people on the ground at the right locations and having bus mechanics available to service coaches if required. “We have the know-how, technology, and communication systems in place that helped us complete that move and many others to perfection,” said Starr.

“It’s also about A-1’s staff,” says Starr. With a staff of nearly 250 including drivers, A-1’s longest employee, who ran dispatch over a 55-year career with the company, has just become a consultant on future projects. Additionally, the company’s roots in sedan-based transportation have transferred its chauffeur philosophy to A-1’s coach business. Starr explains that many of A-1’s coach drivers were once sedan and limousine chauffeurs who understand deep, longtime customer relationships and the nuances of personalized on-time service. Each A-1 coach driver receives ongoing safe driver and first aid training throughout the year.