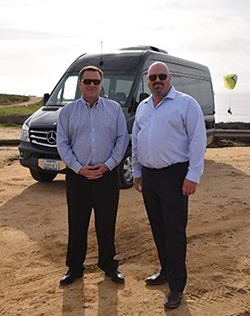 La Costa Limousine co-owners Dale Theriot (left) and Rick Brown Carlsbad, Calif. — The year was 1989. Pro-democracy movements were flourishing around the globe, a postage stamp cost 25 cents, Look Away by Chicago was the top song of the year, and La Costa Limousine opened its doors. After 30 years, La Costa founders Rick Brown and Dale Theriot recall the growth of the business with gratitude for the past and enthusiasm for the future.

Before opening La Costa Limousine, Brown owned a thriving mobile auto detailing business. He realized that his client base would also be an ideal target market for limousine service. Brown discussed his plan with Theriot, and they decided to go into business together. As Brown says, “This was the 80’s—running a limousine company was going to be fun.” And it was!

Starting with one vehicle, Brown and Theriot did it all—driving, answering the phones, maintaining the limousine, and marketing the business. After nine months, they had two cars, and by the next year they hired another chauffeur because they now had three vehicles. In his mind, Brown never expected to have more than five vehicles: That was the dream.

Word got around about the excellent service La Costa provided, and the late 1990s saw a huge leap in La Costa’s operations. They went from four cars to 18 in a short time period.

“It can be hard to operate as a 12-15 car business, but we were able to fly through those potential growing pains,” explains Brown. “We landed the Dav El account, which brought us a lot of business. We had stretch limos running to Los Angeles and back all day long and on the weekend, seven days per week. Our per car revenue was incredible.”

By 2005, La Costa was recognized by major industry awards, but every business faces challenges, and the financial crisis of 2007-2008 hit La Costa hard, as it did just about everyone in the industry. La Costa weathered the tough times and adapted to stay financially strong. Today, the company has 60 vehicles and 130 employees serving all of San Diego County, Los Angeles, Southern California, and nearby states such as Arizona.

“At Commonwealth, we’ve been working with La Costa Limousine for over 15 years. Their service is absolutely flawless, and their staff is a pleasure to work with. We consider La Costa to be an all-around top-notch partner to Commonwealth,” says Commonwealth Worldwide Chauffeured Transportation Global Affiliate Director Tami Saccoccio.

When Brown and Theriot look back at what enabled La Costa to thrive when so many companies have failed, they know exactly what has set them apart. They offer top-of-the-line service and have never tried to be the cheapest, because people will pay for quality. No service provider can be perfect, but when something goes wrong, La Costa does whatever it takes to make it right. Brown says that they never wanted to be the biggest game in town, but because of their good reputation, they are now the busiest.

Thirty years in the limousine industry in California have given Brown and Theriot many memories and a lot of great stories. Brown recalls the client who lived at an exclusive resort and booked limo service every day to do her errands—including trips to Target so she didn’t overpay for socks at the resort! Another client booked a limousine to take him and his dog from San Diego to Toronto for a family reunion: all told, the round trip took two weeks for him and his dog.

Brown and Theriot are grateful for the opportunities and the success they have had, so they give back to the community and their employees. La Costa donates regularly to charities and fundraisers. Their special passion is the Make-A-Wish foundation, and they have been honored to provide more than 2,500 rides for deserving children. Brown and Theriot are proud of the many employees who have worked for La Costa for a long time, including two office staff members who have been there for over 20 years.

As they look to the future, Brown and Theriot have some exciting plans, but more than anything, they intend to keep providing the stellar service that has built their reputation. They are careful to make decisions that will play to their strengths, serve their clients well, and set them up for many more decades of success.