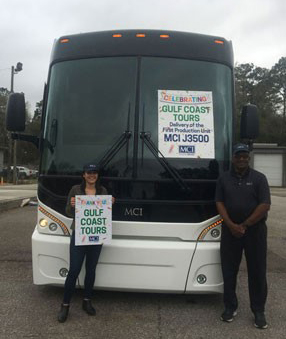 Gulf Coast Tours’ first MCI 3500 coach Des Plaines, Ill.—Motor Coach Industries (MCI) has delivered a new 35-foot MCI J3500 to Gulf Coast Tours, and the way CEO Nick Chamblee sees it, not every tour, corporate, or group client needs a full-size luxury coach to deliver a great experience. Sometimes a smaller vehicle with big luxury, reliability, and safety built in works just as well—especially when the name on the front is MCI.

"In motorcoaches, we're an all-MCI J4500 fleet and the chance to offer the J4500 experience in a smaller coach really resonated for us," said Chamblee, who took over the 30-year-old Gulf Coast Tours in 2016 from his father Ed. "We're seeing a need for group-size flexibility from schools and groups, and we think it could open new doors to business with the corporate and private charter market. Not every group needs a 56-seat coach when a really great 40- or 44-seat coach with all the amenities will do."

The new MCI J3500 is the North American motor coach leader's latest debut to complement its best-selling J4500 recently redesigned with increased space and passenger comfort. The J3500 member of MCI's new J-Series family of coaches features all the styling and comfort hallmarks of the J4500, with seating for up to 44 passengers, a powerful Cummins engine, shared J-coach components, and a turning radius of under 33 feet that makes it a natural for high-traffic situations that call for top maneuverability.

Chamblee, a former professional musician who knows a thing or two about traveling by bus, understands there is always an opportunity to win over a customer who's never considered coach travel as a viable, long-term option. He believes giving opened-minded customers an option like the J3500 as a substitute for minibuses or limousines opens new vistas,

“The reliability of the MCI brand—and the ability to maintain it with interchangeable parts that we stock for our fleet of 17 J4500 coaches—tells our customer that smaller doesn’t mean they have to settle for anything less than a big-coach experience," says Chamblee.

"I think it's important to give the customer a passenger experience that’s all their own," said Chamblee.