Nadeau will be responsible for new coach sales as well as the sale of pre-owned coaches to private and public operators in Quebec and the Maritime provinces. He will be based at the Montreal MCI Sales and Service Center and report to MCI Vice President of New Coach Sales Patricia Ziska.

Nadeau joins MCI following a 10-year career in commercial bus sales, where he progressively advanced in his profession selling both new and pre-owned school buses and minibuses.

Arrow Stage Lines was among the first to place an order for the 35-foot model, paired with the bestselling J4500 as the new MCI J-Series family. The new 2019 MCI J3500 features best-in-class legroom and baggage capacity among all 35-foot coach models, including a 33-foot turning radius for top maneuverability.

Arrow has stationed the new models at its Omaha, Denver, and Kansas City, Mo. locations. 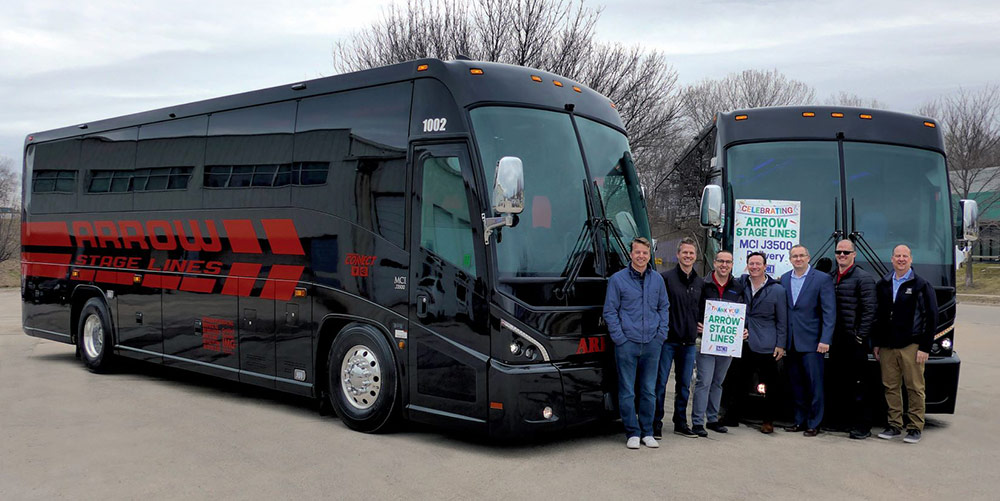 “A smaller-size luxury coach works best in these markets,” explains Arrow Corporate Operations and Marketing Specialist Alex Busskohl, a fourth-generation leader in this family-run business. “We consider the needs of our customers, and we’ve found some smaller groups see more compact coaches as more space-efficient and environmentally friendly.”

Arrow already has sent its new MCI J3500s out on tour as part of its 250-coach fleet that already includes 102 MCI J4500s and 15 35-foot coach models, including those from other manufacturers.

Arrow ordered its new J3500 coaches with 40-seat passenger capacity for additional legroom—the model also comes in a standard 42- or maximum 44-seat configuration—with leatherette seating by Amaya and MCI’s optional variable lighting package that allows operators to customize the interior look of its coaches to suit clients’ brands and preferences.

Arrow tracks and analyzes its data to improve its overall operations and marketing. Busskohl notes that Arrow uses its on-time performance statistics to win new business and that fuel efficiency is an important metric as fuel is the largest operational expense in a fleet Arrow’s size. H says the J3500 is making important strides in fuel efficiency.

“It’s performing well—even a half-point gain in fuel economy is important to us operationally,” adds Busskohl.