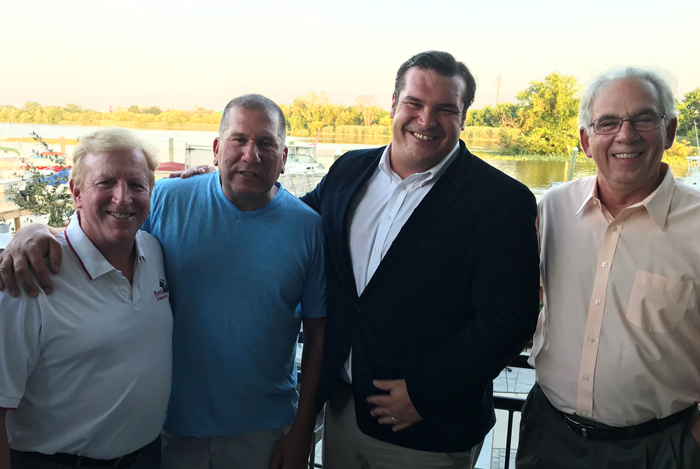 L to R: Jeff Schmidt of Research Underwriters, Alan Candeub of Park Avenue Limousine, Ryan McTiernan of Lancer Insurance, and Steve Rhoads of Rhoads Limousine Service Ridley Park, Pa.—The Philadelphia Regional Limousine Association (PRLA) welcomed close to 50 members and guests at its summer meeting on July 10 for a casual evening of networking at Stinger’s Waterfront. CD Director of Events Jess Pavlow and Editor Rob Smentek were among those in attendance for the event, which was sponsored by Lancer Insurance and Prevost/Volvo motorcoaches.

After kicking things off with an open-bar cocktail hour, PRLA President Johnny Donohoe of Sterling Limousine welcomed the group, which included operators spanning the Northeast corridor. Pledging to keep things short and casual, Donohoe then welcomed association Treasurer Bob Euler Jr. of King Limousine, who delivered some excellent news in regard to the organization’s financial situation. After settling with their former lobbyist, the PRLA’s coffers are in the black and the outlook for the future remains positive. 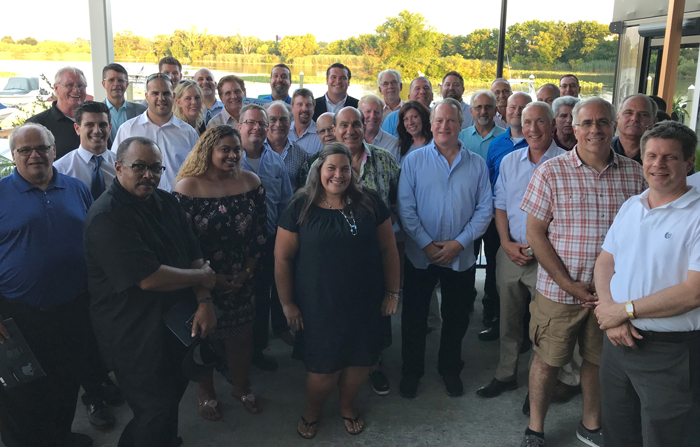 The PRLA members and guests at Stinger’s Waterfront Euler also provided an overview of recent developments with the Philadelphia Parking Authority (PPA) and the Philadelphia International Airport. First, he informed the operators that there is a “crackdown” in place at the airport. In April, more than 20 chauffeurs were ticketed for solicitation and parking in the cell phone lot. As the chauffeurs are the ones receiving tickets, as opposed to the operation, Euler encouraged members to be vigilant so that any unpaid tickets don’t penalize the companies down the line. Also, he revealed that the PPA is proposing levying $2.50 per trip fee on TNCs. While parity with Uber and its ilk is far from imminent, the PRLA Board supports of this fee, which puts them on a path toward a level playing field. 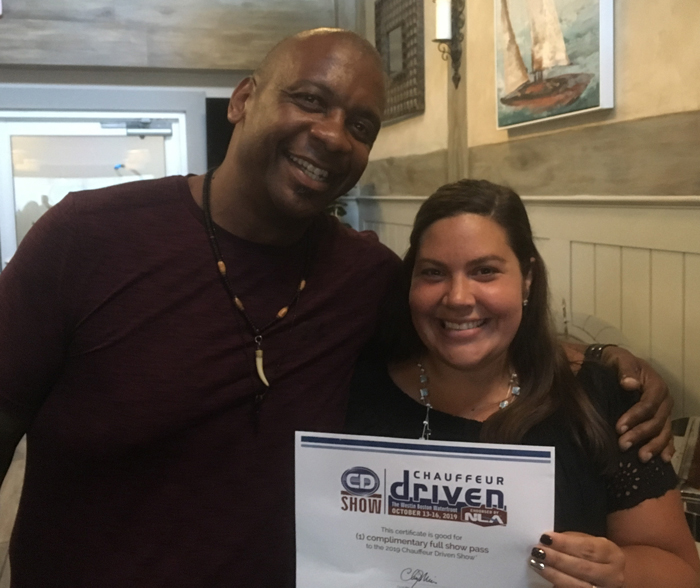 CD Show pass winner Tyrone Gale with CD Director of Events Jess Pavlow Next, Secretary Tracy Salinger from Unique Limousine introduced sponsors Jay Snead from Prevost/Volvo and Ryan McTiernan from Lancer Insurance, who each spoke briefly about the services they offer the industry. Salinger then told attendees that the PRLA was donating $500 to a GoFundMe set up for Statement Limousine in Sheffield, Ohio, whose operation was devastated by a fire. She encouraged members to donate as well.

After Donohoe made his closing remarks, longtime PRLA member Dennis Adams of Celebrity Limousines bid the group an emotional farewell, as he is retiring and heading for warmer climates. Finally, the meeting concluded with a raffle of a pass to the 2019 Chauffeur Driven Show in Boston. The winner was Tyrone Gale, who is returning to chauffeured ground transportation after a short break away from the industry.

PRLA’s next meeting is scheduled for September 25, at a location to be determined.