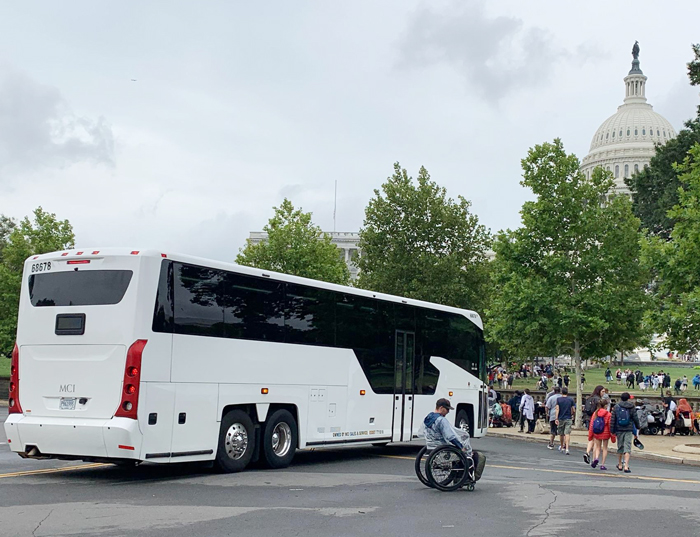 The MCI D45 CRT LE coach participated in the NCIL March & Rally Des Plaines, Ill.— For the second year in a row, Motor Coach Industries (MCI) brought its MCI D45 CRT LE to the National Council on Independent Living’s (NCIL) March & Rally July 23 at the U.S. Capitol. The newly designed motorcoach was the only vehicle appearing at the event, which hosts more than 1,000 people with disabilities, disability advocates and allies, members of Congress, and government officials. The 1.5-mile march marked the 29th anniversary of the anniversary of the Americans with Disabilities Act (ADA), signed on July 26, 1990.

The MCI D45 CRT represents the biggest change to bus design since MCI built the very first highway bus with a wheelchair lift, pioneering the first inboard-based elevator lift six years ahead of the ADA. NCIL’s leadership advised on design of this revolutionary new commuter coach, which is built for highway speeds and features the first-ever second door with patented curb-level Low-Entry Vestibule with seating for improved ADA accessibility.

MCI has positioned its newest coach as the vehicle of choice for public and private transportation systems, serving a workforce of all ability levels. Offering sleek, contemporary exterior styling, the coach also sports techie- and millennial-friendly features, including cabin-wide Wi-Fi, power outlets, USB ports at each seat, and optional bike racks.

NCIL Executive Director Kelly Buckland, who uses a wheelchair, was one of many volunteers for the disability community that evaluated concepts and final prototype design.

“One of the things we learned was how valuable the engagement and feedback would be from everyday users of our vehicles for accessibility features. NCIL and others were directly reviewing our design as it developed. They told us it is still not common to make user groups part of the design process in transportation, an important part of a person’s independence,” said MCI Vice President of Public Sector Tom Wagner. 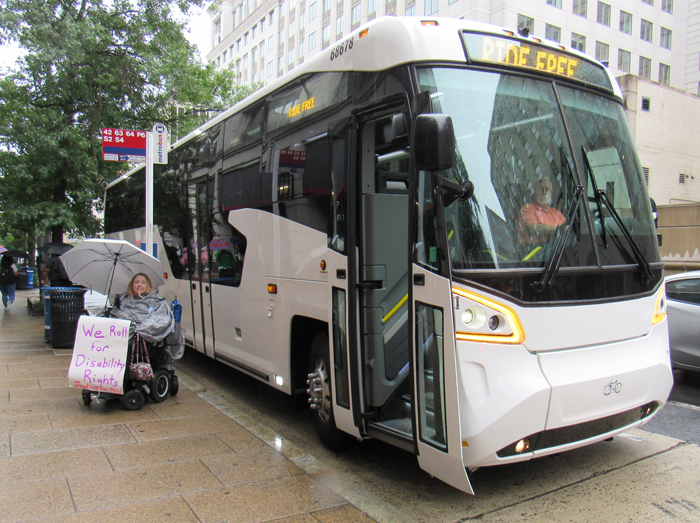 NCIL’s leadership advised on design of the MCI D45 CRT “MCI is exceptionally proud to return as the pace bus for the March to the U.S. Capitol for this reason. We are very proud of this coach and the one-of-a-kind collaboration that built it,” said Buckland. “You will see many transit agencies with accessibility committees that involve groups like ours, but this is the first time we’ve worked directly with a major manufacturer of motor coaches to design a vehicle from Day One. The MCI D45 CRT LE addresses the day-to-day challenges people with disabilities face. MCI offered us unprecedented access to their process and incorporated our feedback throughout. And that is why this coach is part of the March to the U.S. Capitol.”

Featuring a curb-level ramp requiring minimal operator support, the coach allows passengers with mobility devices to board through a mid-coach door that opens directly into a same-level, patent-pending low floor entry (LE) vestibule. The vestibule offers passenger seating, including for those using mobility devices, plus companion seating, and amenities including power outlet access. The coach also offers the manual Q’Straint wheelchair securement system as standard and the automated Quantum securement system as on option for the rear-facing position on the right of the vestibule.

Since its unveiling in fall 2017, the MCI D45 CRT LE has joined public transit fleets and the private commuter service of a Silicon Valley giant.