Brentwood Livery, a luxury ground transportation company based in Kitchener, Ontario, Canada, commemorated their 30th anniversary with a Virtual Celebration on April 30. Founded in 1990 by the husband-and-wife team of David and Marilyn Ferguson, the family-run company is now manned by the second generation. 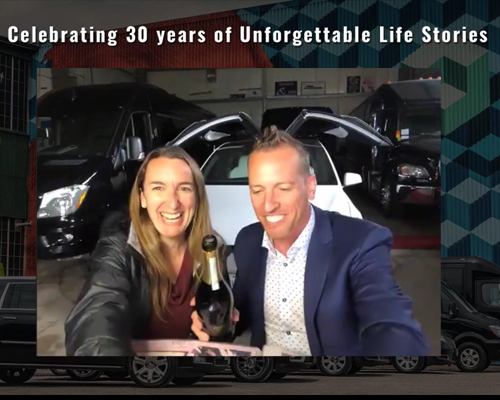 “My parents started this company with a six-passenger Caprice Classic stretch limousine with burgundy interior,” says Brentwood Livery “Chief Experience Officer” Brent Ferguson. “Before he passed away in 2007, his focus was always on customer service. He taught me how to be an entrepreneur. Helping our clients be successful is why we continue to do this.”

Brent is joined in the company by his wife Laura, who he says fills the role of “chief whatever-I-don’t-do” and his sister Beverly Bryant, who serves as key reservationist.

“I’m fortunate to have successful women around me,” says Ferguson. “They make me a better person.”

Together, the Ferguson/Bryant team spearhead a staff of 30 employees and manage a fleet of 30 vehicles, which includes everything from sedans to buses. Recently, Brentwood introduced a couple Teslas into their vehicle options, and they’ve become a hit with clients—and spectators.

“After we dropped our first Tesla clients at the airport, they called from the terminal to book their next two trips with the electric cars. And, our chauffeur told us that people were taking pictures of the car at curbside because they were so impressed with the look of the gull-wing doors,” says Ferguson.

When it came time to celebrate Brentwood’s approaching anniversary, the company initially planned a large party for their clients and friends. However, the COVID-19 crisis forced the team to be creative.

“How do you celebrate when you can’t hug your clients?” wondered Ferguson.

In lieu of a traditional get-together, on April 30, the Ferguson family hosted a 30th Anniversary Virtual Celebration on Zoom and Facebook Live where their clients were invited to share any memories of how Brentwood Livery contributed to an unforgettable life event or experience. Dozens participated, including their hometown mayor, who sent a message of thanks. Several videos from the celebration can be viewed on Brentwood's Facebook page.

Brent says that another person who took part in the virtual celebration was a 25-year Brentwood client who was first driven by David Ferguson to a high-school reunion. Since then, the client has booked with the company for several major life events–including his mother’s 90th birthday party—not to mention regular corporate transportation.

“It’s cool to know that we’ve made an impact on peoples’ lives,” says Ferguson.