The presidents from the two leading motorcoach associations—Peter Pantuso of the American Bus Association and Larry Killingsworth of the United Motorcoach Association—released a statement praising Sen. Susan Collins (R-Maine) for her leadership in her efforts to save the industry as it struggles during the pandemic, such as introducing the Coronavirus Economic Relief for Transportation Services Act (CERTS Act) with Sen. Jack Reed (D-R.I). 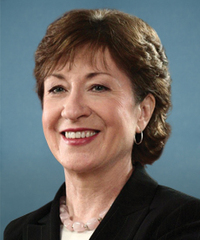 The letter read, in part: "We appreciate Senator Collins' commitment to the motorcoach industry on behalf of the citizens of Maine and the tourism community, which is so vital to Maine’s economy. Senator Collins was looking for a solution that keeps a viable motorcoach, travel, and tourism industry operational and their employees engaged. The CERTS Act, S.4150, led by Senator Collins and 28 of her Senate colleagues, will ensure these industries survive the COVID-19 pandemic. Without Congress' support, [this] industry may not recover from the economic downturn. … Senator Collins is fighting for these businesses and all of Maine, and for the many Americans who rely on motorcoach transportation to get them to and from work, events and travel reliably and safely each day."

Statistics are on their side: The U.S. motorcoach industry employs nearly 100,000 individuals and provides nearly 600 million passenger trips per year ensuring vital intercity connections for rural communities, relieving congestion, and providing reliable commuter operations for urban areas. Motorcoaches connect people to their jobs, and are also a key element of our nation’s defense system and support military troop movements and take people out of harm’s way by supplying evacuation services during hurricanes, fires, and other national emergencies. Charter and tour operations are an essential part of the travel and tourism industry and will be essential to help those businesses as the nation recovers from the pandemic. The industry has lost more than $11 billion dollars since the pandemic hit in March and without government assistance will likely lose 40 percent of the small family-owned businesses.

According to a recent survey of Maine voters, 70 percent view the bus and motorcoach industry in the state as an essential service for all Mainers from every socio-economical background and believe the government should make assistance dollars available the same way it did for the airlines and rail services to ensure small businesses can keep their doors up and their dedicated and skilled workforce employed.

In the same survey:

"Just as Maine voters see the motorcoach industry as essential, so do many voters around the country,” Pantuso and Killingsworth said. “If our industry fails and millions of people are left without a stable, economic means of transportation, our country’s economic rebound from this pandemic may be at stake."