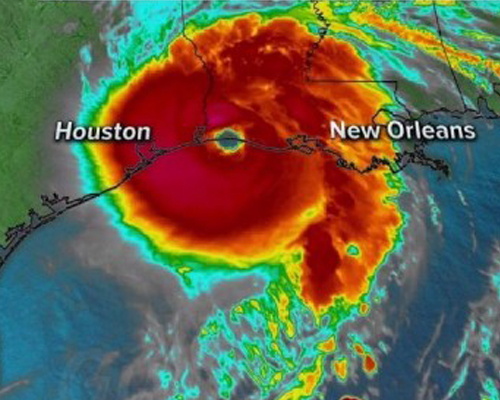 Parts of Louisiana and Texas are recovering after Category 4 Hurricane Laura, among the strongest storms to hit the state of Louisiana, made landfall in the early-morning hours of August 27. The storm, with peak winds up to 150 mph, sheered rooves, knocked down telephone poles like twigs, and sadly claimed the lives of four people. While it was a devastating storm, it could have impacted even more people had it hit in Houston or New Orleans, major population centers to the east and west of landfall.

Once weather forecasters knew that the storm was destined to affect the Gulf Coast, the motorcoach industry sprang into action—just as it always does during weather events like this, including the Northern California fires. All in all, the American Bus Association is reporting that more than 400 buses from 130+ companies provided evacuation assistance.

"Each year 600 buses or more are called upon to assist in hurricane response activity in the U.S.  It is their responsibility, not to be taken lightly, to move thousands of people out of harm’s way—from nursing homes, hospitals, senior centers and other facilities—and provide transportation for those who have no other means to evacuate," said ABA President & CEO Peter Pantuso.

During the United Motorcoach Association’s Town Hall on August 27, Mike Moulton of Transportation Management Services detailed his firsthand accounts of what was happening on the ground, noting that just 12 hours after landfall they were already starting to reconnect people with their homes in areas that weren’t as heavily damaged. The coast was still experiencing storm surge. He said that he personally dealt with more 450 buses, representing more than 80 companies.

COVID-19 and its deleterious effects on the industry did cause a bit of a wrinkle as most bus operations are mostly shut down and drivers furloughed. Companies did have to do a bit of scrambling to ensure that insurance, DOT regulations, and driver certifications were all in place, but Moulton reports that it all came together.

Both associations and its members have been fighting for motorcoach operators as COVID-19 has devastated the U.S. motorcoach industry, including several companies that have shut their doors permanently. Both ABA and UMA have engaged in an outreach campaign that includes securing $10B in loans and grants to the industry via the House’s and Senate’s Coronavirus Economic Relief for Transportation Services (CERTS) Act; holding a rally in Washington, D.C., earlier this summer; and reaching out to the media to showcase the importance of the motorcoach industry. The industry provides vital support for local emergency responders, especially in rural and harder-to-access areas, and Pantuso worries that these efforts could be hampered when vulnerable citizens need help the most.

“When the call comes for help now, this traditional emergency response force relied upon by the federal, state and local governments in these situations is not ready. Now who will answer the call to help evacuate if the buses aren't running?" asks Pantuso. "The industry needs help from Congress to stay alive, to be available during these disasters, to move the military and to get people to jobs. Without Congress' support the motorcoach industry will not recover from the economic downturn caused by the coronavirus. These businesses are closing their doors daily, many of whom would normally answer the call to help evacuate Americans during natural disasters like hurricanes and wildfires in California."

Although there has been strong bipartisan support for both the House (H.R.7642) and Senate (S.4150) versions of the CERTS Act, UMA COO Ken Presley reported during the UMA Town Hall that he doesn't think there will be any Congressional action on an overall stimulus/relief package until late September.