NLA Executive Director Phillip Jagiela and NLA President Gary Buffo Washington, D.C. — It was that time of year again when several hundred members of the National Limousine Association (NLA) descend upon our nation’s capital to meet with their representatives (or their staffs) to discuss the issues affecting the industry in their area. The event also included a meeting of the NLA Board; educational sessions on how to work with politicians before, during, and especially after the meetings; and a first-ever Association Presidents’ Summit, which was created to keep the conversation going.

The board, led by NLA Executive Director Philip Jagiela and President Gary Buffo of Pure Luxury Transportation, worked with Cornerstone Government Affairs to set up the meetings with representatives. Cornerstone also provided tips on how to work most effectively with not only Washington politicians, but also their state governors and representatives. After a day on Capitol Hill full of shaking hands and speaking their minds about what’s impacting their businesses in their districts, attendees enjoyed a multi-course meal and plenty of cocktails at Joe’s Seafood, Prime Steak & Stone Crab.

The following day, the Association Presidents’ Summit included over two dozen local association presidents who gave the roundtable a snapshot of what was happening in their areas, legislatively and professionally, and how the discussions with their representatives went.

Louie Perry, one of the founders of Cornerstone, said that working with local politicians gives the industry a unique opportunity to be heard. “On the federal level, legislation moves much slower, but the state, especially the executive branch, can react faster and legislation can be written quicker,” he said. “Local and state legislators aren’t as sophisticated as those in Washington because it’s often a part-time gig for them, but there is an opportunity to educate them and earn them as an advocate in a way that is much more impactful.

The conversation, unsurprisingly, was dominated by Uber and the TNCs, as every association president mentioned the current status of the app in their cities and states. Limousine Association of New Jersey President Jim Moseley of TripTracker shared a call he got from a new operator who purchased an established company in N.J. “He called me and asked what we could do to help. He said that they were losing chauffeurs to Uber at a rate of about 10 percent per month and that another month or two of this and he would have to file bankruptcy. He just purchased the company a few months ago for a quarter-million dollars. Uber is very, very clever, and we have to be, too.” 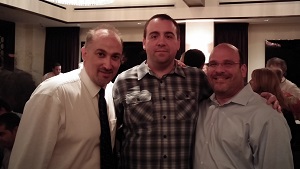 ( L to R) LBTOUNY President Kevin Barwell, AJ Thurber of Grech Motors, and Tony Simon of Reston Limousine Greater California Livery Association President Rich Azzolino of Gateway Global says that they are meeting more frequently because of TNCs. “We’re meeting, at least the board is, almost every week. We were doing quarterly meetings, but now it’s meetings in different parts of the state twice a month. In California, the cab companies are almost out of business because of TNCs. Uber doesn’t want regulation, period, but I think the regulators are coming around to understanding our side of the issue.” Azzolino was also one of many presidents to mention the benefits of working with a local lobbyist.

But the news wasn’t all discouraging. Vice President of West Florida Livery Association Dave Shaw of Olympus Limo & Sedan Service reported that a bill that was crafted by and in favor of the TNCs was thrown out and rewritten. Shaw says that he hopes to work with legislators to craft the new bill’s language.

Perhaps the biggest announcement to come out of the event was NLA’s newly active stance on fighting Uber and other TNCs. Buffo said that the association, partially because it was a regional issue, was previously neutral on the apps, preferring instead to support regional associations as they battled it locally. He said that as of its executive board meeting that enough was enough and they are going to ramp up not only their backing of regional associations, but will aggressively take on the issue itself. More information will be released in the near future and will be circulated to all of the local associations.