GBTA Urges Leaders to Continue Stimulus Talks to Save Economy

Editor’s note: On October 6, President Donald Trump tweeted that he told his “representatives to stop negotiations until after the election,” citing a breakdown in talks between his administration and Congress. Both the House and Senate have been working on bills that have failed. The reaction to the President's news was swift and furious as COVID rages on. Later the same night, he seemed to walk back his earlier comments and instead urged Congress to push a piecemeal version of a bill that would include stimulus checks, unemployment extension, aid for the airline industry, and a second round of the Paycheck Protection Program (PPP). Talks are ongoing. 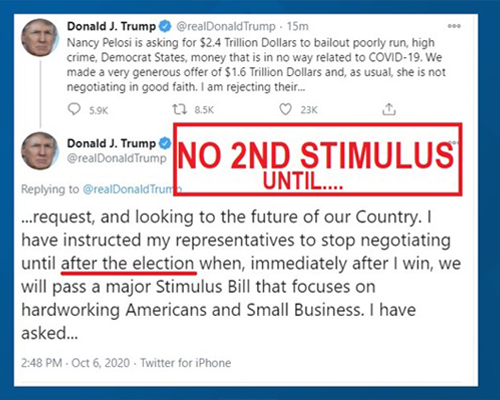 The global pandemic has wreaked havoc on the business travel industry. In the initial round of CARES Act funding, U.S. airlines agreed to forego layoffs in exchange for $25 billion in grants. This agreement expired September 30. Since then, media reports of massive airline layoffs have noted that as many as 100,000 workers will be let go in the near future unless elected leaders take action immediately. According to the World and Travel Tourism Council, international GDP losses could total as much as $5.5 trillion—with job losses for 2020 projected at nearly 200 million jobs.

“With hundreds of thousands of jobs hanging in the balance, the business travel sector and the American economy need help now, not a month from now,” said Dave Hilfman, the GBTA’s interim Executive Director. “Our association and its members urge the Administration and Congressional leaders not to wait on a relief package, because without additional financial support from the U.S government, companies nationwide will be at serious risk of a meltdown.”

Hilfman noted that the near-complete shutdown of business travel in the U.S. and internationally has negatively impacted the entire travel ecosystem, including travel agencies, hotels, ground transportation, and airlines: “If the economy is to come roaring back, business travel will be a major player. We need the travel system to be ready to meet the demand.”