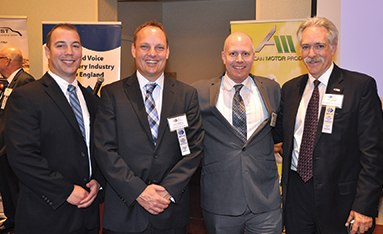 The meeting kicked off with the educational seminar “Understanding and Meeting Client Expectations,” presented by Rick Cavalieri of BostonCoach. The workshop focused on training one’s chauffeurs to meet client expectations, and was offered by NELA as part of its initiative to provide association members with opportunities to better their services by increasing their industry knowledge.

NELA CEO Rick Szilagyi then addressed association matters. In addition to discussing the association’s ongoing pursuit of a level playing field for transportation network companies (TNCs) and licensed ground transportation operators, he also announced that the board has voted on changes to NELA’s bylaws. One of the most significant revisions to the bylaws is that members are now eligible to run for board positions two years after joining the association.

Dawson Rutter, president of Commonwealth Worldwide Chauffeured Transportation and Political Action Committee co-chair for the National Limousine Association (NLA), spoke about the NLA and the recent publication of its stance on TNCs. Rutter called for educating the public and corporate compliance officials alike on the safety issues that unregulated transportation services present, which he said would be key to ensuring the success of the legally operating livery industry.

Weiss also addressed the ongoing TNC issue, as well as the continued improvement of the economy. He attributed the livery industry’s 10-20 percent growth year over year to key areas of the business TNCs have difficulty emulating or breaking into, such as the customer-service focus a chauffeur can offer that an unlicensed rideshare driver cannot. Weiss also offered an update on November’s Chauffeur Driven show.

Chosen Payments CEO Jeff Brodsly emphasized his company’s mission to support the NLA and the chauffeured transportation industry, and discussed the ins and outs of credit card processing.

The quarterly meeting also hosted the ongoing American Motor Products’ road show, which gave an overview of the many fleet discount programs the organization’s sponsors have designed for the industry.

NELA’s next membership meeting will be December 9.