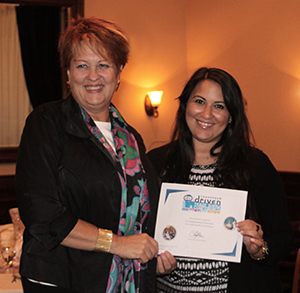 After appetizers and friendly conversation, the meeting got down to business with a brief introduction from PRLA President Jim Salinger before the meeting’s speakers took to the podium.

John Bumsted of J. Bumsted & Associates, who provides DOT compliance audits and transportation-safety training, then discussed the rules and regulations for commercial drivers in Pennsylvania and the limitations of CDL versus non-CDL drivers. He then took questions from PRLA members ranging from regulatory compliance for buses to the ongoing battles with the Pennsylvania Public Utility Commission (PUC) and the Philadelphia Parking Authority (PPA). PUC was the hot topic of the evening, as updates regarding its August 28 hearing on PPA were discussed.

Chauffeur Driven’s Show Manager Lauren D’Ambra and Editor Madeleine Maccar were both on hand to attend the evening event. After providing a few updates about the upcoming Atlantic City show, D’Ambra raffled off a pass to the event, which was won by Denise Sam Cali of J&J Private Car, Limousine & Coach Service.

PRLA president Jim Salinger of Unique Limousine welcomed “any vendor with a current membership” to apply for the open vendor position on the association’s board before members discussed how insurance companies are starting to come after drivers who are providing their services to transportation network companies (TNCs).

Mike Barreto of Flyte Tyme Worldwide Transportation then discussed a few items concerning the PRLA’s efforts to work with the Philadelphia International Airport, which has turned into a “great relationship over the years.” Chief among them was the construction of the F terminal’s baggage overpass, which will minimize foot traffic for chauffeurs, as well as working with the city to change the penalty incurred from receiving tickets in the airport’s parking lots. Parking violations themselves have been on the decline, though TNCs are still “running rampant” and account for half of the infractions.

TNCs were a main point of Barreto’s, who reiterated that while they may not have an immediate impact on the chauffeured ground transportation industry’s core clientele, “they will affect you if you’re doing business in five years and will change the way you’re doing business if you don’t adapt or at least communicate what you do for your clientele and how you service them.” He urged those in attendance to start speaking up and make their united stance against TNCs known to public officials.

“You can’t fight money with pockets that are deeper than you’ll ever know. Where you can fight it is with numbers, as a constituent,” he said. “As an industry, we have to understand that this is not a monster that’s going to show its face and then go away. It’s going to change the way we do business. Unless you try and get in front of this to protect your interests, not many people in this room will still be here.”

The next PRLA meeting will be at Fred Beans Ford on October 8.