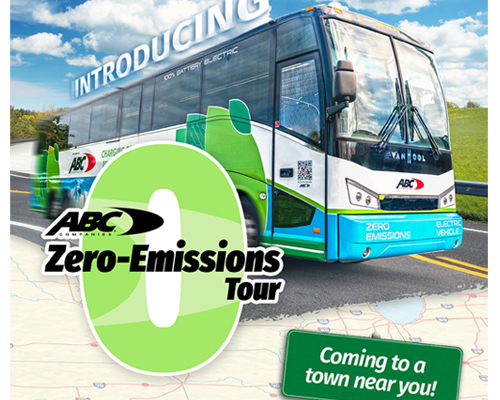 Bus provider ABC Companies is conducting a North American demo tour of its 100 percent battery electric Van Hool motorcoach models along with several zero-emission cutaway shuttle vehicles. These electric vehicles showcase the potential for transporting 12 to 69 passengers completely emissions free. The Van Hool TDX25E Double Deck 69-passenger motorcoach, and the CX45E 52-passenger coach utilize Proterra battery systems and are capable of ranges over 250 miles per charge. In addition, the tour also includes 100 percent battery electric cutaway shuttles based on popular chassis options including the Ford E450. Since early May, the company has sponsored tours and test drives with customers in key regions around the country to showcase the EV models, while creating awareness and educating commercial users, their communities, stakeholders, and lawmakers about the many benefits of zero-emissions ground transportation.

With tour stops across the US and Canada, it has also highlighted the flexibility of these vehicles to travel utilizing publicly available chargers. With the growing number of available fast chargers through networks such as Electrify America, the tour has also included a number of long-distance connections between tour stops. Most recently, the Van Hool TDX25E double deck motorcoach traveled more than 2,500 miles from Florida to California exclusively on public chargers. This follows a number of other trips completed by other tour vehicles showcasing their flexibility across various temperatures, travel speeds, elevations, grades and more. All vehicles are monitored in real time with telematics systems capturing precise locations, vehicle performance, energy usage, projected ranges, and more, providing ongoing learning and real-world data.

“The goal of the ABC Companies Zero Emissions Tour is simple: we want customers and communities to understand that zero-emissions coach and shuttle travel is a reality now, even as technology and infrastructure is still growing. There are a lot of misconceptions and confusion about what is reality versus what is still in development. Bringing these vehicles directly to our customers, demonstrates our confidence in their potential to transform travel now. This is a rare moment in time for the motorcoach and passenger transportation industry to lead a transformation that is top of mind with the public and our government,” said ABC Companies President & CCO Roman Cornell.

Through the Zero Emissions Tour initiative, ABC Companies is committed to supporting the net-zero sustainability goals of communities, municipalities and regional operations throughout North America. The company’s diverse portfolio of clean-diesel and EV commercial ground transportation vehicles and programs are designed to integrate world-class technology, technical expertise, and aftermarket support that focus on a cleaner future.

“We’ve shaped this program to give our operators the unique ability to experience electric vehicles in their fleets firsthand, which in turn allows them to promote and directly demonstrate to customers and communities their commitment to green transportation and a zero-emissions future,” said ABC Companies Vice President Marketing Thom Peebles.