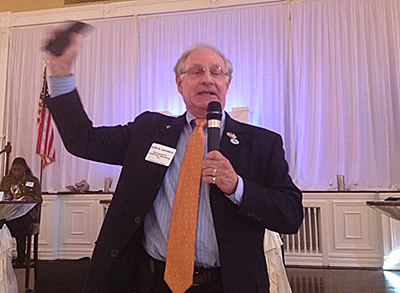 “I explained to the audience, since these were insurance people, that their interests and our interests were actually very much the same: We look at this issue as public safety; they have to look at it as public safety from a risk standpoint,” Lefkowitz said.

Lefkowitz has been among those painstakingly collecting data to make a case against Uber, which has culminated in Assembly Bill 3401. The bill, which aims to regulate TNCs with Representative Charles Mainor as its lead sponsor, continues to gain traction.

Armed with the fruits of his and others’ efforts—as well as a few helpful texts from LANJ member Jeff Shanker of A-1 Limousine and Natasha Gonzalez of the New Jersey Taxi Cab Association (NJTCA), who were among the estimated 175 people in the audience—Lefkowitz cited myriad instances where Uber has fallen short of its safety responsibilities to passengers, drivers, and the general public, or has outright violated state insurance laws, including: improperly vetted drivers’ attacks on passengers; how the Pennsylvania Public Utility Commission (PUC) has turned down Uber for its public safety violations; and the TNC’s summer ad campaign in the Jersey Shore area that aimed to attract new drivers, even though it’s illegal for New Jersey drivers to use their private vehicles for commercial purposes, as reiterated in a press release issued by the state’s Department of Banking and Insurance on behalf of N.J. Governor Chris Christie.

“I think one of the meeting’s highlights was when Assemblywoman Spencer made it clear that TNCs will be regulated, and then she read part of the press release from the Department of Banking and Insurance because (Usher) was making these claims about how Uber has all this insurance coverage,” Lefkowitz said. 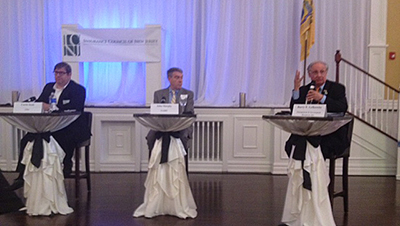 Former LANJ Executive Director and current lobbyist Barry Lefkowitz (right) was part of the Insurance Council of New Jersey’s panel discussion, entitled “Transportation Network Companies: How Are New Jersey Drivers Protected When Providing Ride Services?”Lefkowitz, who also represents the NJTCA and does work for the International Association of Transportation Regulators, says that the panel also discussed the difference between insurance coverage for taxis and limousine services, and how taxis, while “on 24/7,” only operate within a designated municipality; AB-3401 will be modified before its as-of-yet unscheduled hearing to demand that TNCs establish a base and be listed as dispatch companies.

“Right now, TNCs have no financial obligation to New Jersey, so we’re going to help make them good corporate citizens of the state,” said Lefkowitz.

While giving the seriousness of the topic its due reverence at the panel, Lefkowitz admits that he “had a blast” arguing against all the claims the Uber representative made.

“He was somewhat annoyed with me but I didn’t care,” Lefkowitz said. “One of the things I really annoyed him with was saying there is nothing really unique about what the TNCs are providing. I said that, if you think about it—and I held up my phone—this is nothing more than an advanced way of radio dispatch, connecting a driver with a passenger.”

LANJ will hold its next meeting November 4 at Chauffeur Driven’s Atlantic City show; those interested in joining LANJ in its ongoing battle to bring TNCs to a level playing field can save $150 by becoming an association member before or at the show.