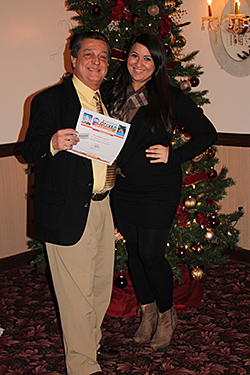 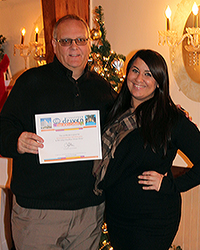 Craig Gentzler of At Your Service Limo and Chauffeur Driven Show Manager Lauren D’AmbraThe holiday event brought together association members, supporters, and industry operators alike. Chauffer Driven’s Show Manager Lauren D’Ambra and Editor Madeleine Maccar were both in attendance for the night of good cheer and good company that delivered plenty of opportunities for those present to mingle on a friendly basis after a year fraught with ongoing battles against TNCs and meetings with state regulatory agencies.

Everyone received chips and play money to try their hands at the likes of black jack, roulette, and craps, with the option of purchasing more to increase their chances of landing the jackpot in their games of choice. Winnings were turned into raffle tickets, as many companies donated prizes to be won by those who had the luck of the draw on their side. Included among the various prizes were two passes to the 2015 Chauffeur Driven Show, which will be held in Miami from October 11-14, and were won by Vince Mazzarella of Champagne Limousine and Craig Gentzler of At Your Service Limo.

The next PRLA meeting will be January 14.