UMA to Take Its Annual Expo to The Big Easy 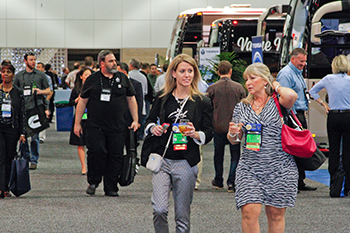 New Orleans — The United Motorcoach Association (UMA) will hold its 31st annual UMA Motorcoach Expo from January 18-22 in New Orleans. More than 1,700 representatives from the motorcoach industry are expected to participate in the yearly event, which is a trade show and an educational forum that offers plenty of opportunities for learning, networking, buying vehicles, and growing one’s business.

According to UMA’s Marketing & Membership Director Michele Nosko, registration numbers are up and a record number of coaches and equipment are expected to fill the expo’s showroom floor. ABC Companies, Alliance Bus Group, Motor Coach Industries, Prevost, and Temsa are among those slated to showcase more than ever before at the 2015 show.

“The big news for the trade show itself is that some of the industry’s key manufacturers will have more equipment on the showroom floor this year,” Nosko said. “Many of them only had one coach last year; this year, they’re coming with three or more coaches, which is really exciting.”

The expo will also be beefing up its networking opportunities as well as its educational offerings, as Nosko says that the event is known for offering “stellar” learning opportunities, and is even a great first step for any operators looking to add that first bus or motorcoach to their fleet.

“If someone is thinking of getting into the bigger vehicles, this is a great venue for that: They can not only see the equipment but also attend educational sessions to really learn about them,” she said. “With all of its unique regulations, this is a really great learning resource for anyone getting into the motorcoach industry.”

New for 2015 is the Motorcoach Mardi Gras fundraiser, which will be held January 19. The proceeds from this inaugural event will help fund the Go Motorcoach campaign, which aims to increase public awareness regarding the benefits of traveling by motorcoach.