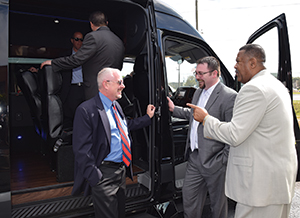 After the treasurer’s report from Sheri Boesch of Network Limousines, Hillsborough County Public Transportation Commission Executive Director Kyle Cockream discussed changes in local permits and provided an update on how the commission has been policing TNCs in the county.

“They’re trying to get TNCs to abide by the rules and regulations, and they’re issuing citations,” said WFLA President Dave Shaw of Olympus Limousine. He added that an injunction has been issued against Lyft and Uber “because they were sent cease-and-desist letters about operating in Hillsborough County, which they basically ignored.”

Shaw then spoke about Florida Limousine Association’s (FLA’s) fundraising and lobbying efforts for 2015. Shaw said that FLA has hired a lobbying firm from Tallahassee and another in southern Florida to help the state associations in their battle against TNCs, and has also contracted with a Tallahassee PR firm “to spread the word about our issues.” But that outside help does amount to a considerable cost.

“It all comes to about $145,000 in commitments, so we’re doing a fundraising campaign; hopefully, we’ll be able to get that amount of money,” said Shaw. “We got about $100,000 last year and we’re shooting for that again.” 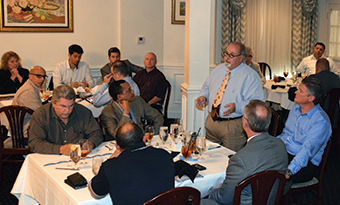 The WFLA meeting hosted industry members from all over the countryThe monthly meeting hosted a number of out-of-state guests. Driving Results’ ownership/leadership group Spinning Wheels had its first meeting of the year in nearby Tampa and stopped by to show support for fellow member Boesch’s regional association. Having an array of industry members representing regions all across the country allowed for an overview of what other states are doing to combat TNCs locally.

“A lot of the Spinning Wheels members are involved in their associations, so we let them get up and speak,” Shaw said. “We had a lot of input about what other associations are doing and how they’re going about it.”

Chauffeur Driven Publisher Chris Weiss was also on hand to talk about CD’s 2015 events, as well as donate thousands of dollars to the association’s ongoing battle against TNCs, as Chauffeur Driven has recently become a member of WFLA. Weiss also raffled off a pass to June’s Executive Retreat in Nashville and the Miami Beach show in October.

“It was a fantastic meeting, and we enjoyed everyone being there,” said Shaw.

Shaw added that in the week following the meeting, two House bills were introduced that affect insurance and TNCs, as well as another House bill that was filed in Tallahassee and also pertains to unregulated transportation operations.

“It’s a bill to regulate TNCs but it was written by, we believe, Uber lobbyists,” he said. “We haven’t really discussed any of it yet because they were just introduced, but we are on top of it.”

The next WFLA meeting will be March 24.