Modern Car Saves the Day of a Reporter on Biden Trip 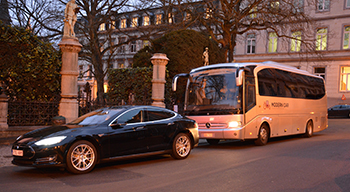 Brussels, Belgium — During a trip with Vice President Joe Biden, a reporter found himself riding in the lap of luxury with the Veep’s motorcade: Not in the usual minivan or shuttle bus that they are generally expected to ride in, but a glamorous, all-electric Tesla S sedan. It was enough to capture the attention of the Wall Street Journal, which published an article about it in early February. VP Biden is notorious for his love of cars, and according to the article, he was unaware that the Tesla was even part of the motorcade.

Transportation in Europe was handled by Stephane Brombeck’s company, Modern Car. Modern Car has been known for its expert handling of international dignitaries and has often handled transportation for President Obama and his traveling entourage. Teslas are the newest additions to Modern Car’s fleet, which have been received with rave reviews.

According to the WSJ article, the president and vice president are driven around by their own armored Cadillac—which they generally have in tow—in addition to a traveling cavalcade of press, staffers, and other low-level officials. After an event in Brussels with the Veep, a Washington-based reporter was sadly left without a ride on “Press 1,” the van they designate carrying press staff in the motorcade. Luckily, Modern Car was able to step up and provide the Tesla for the very luck reporter, indeed. The sweet ride didn’t last long, however, as it was back to the Mercedes-Benz Viano (of, the tragedy) at the next stop on the tour.