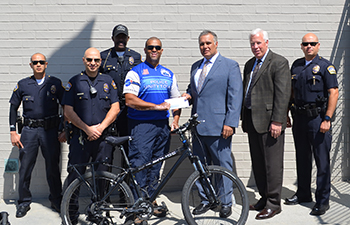 At the LAXPD station, GCLA President Kevin Illingworth of Classique Worldwide Transportation (third from right) hands a check to officer Mike Dear, who, along with Police Chief Patrick Gannon (not pictured) represented the department at the annual Police Unity Tour Los Angeles — When the Police Unity Tour kicked off May 9, members of the Los Angeles Airport Police Department (LAXPD) were among the throng of police officers who came from all over the nation to make the 400-mile bike ride from New Jersey to Washington, D.C.—with the support of the Greater California Limousine Association (GCLA).

Since 1997, the annual event has been honoring officers across the country who were lost in the line of duty but this is the first year that GCLA was asked to participate, a testament to its increasingly positive relationship with the LAXPD that has been the fortunate offshoot of attempts to curb TNC activity at the airport.

“LAX is ensuring that TNCs aren’t doing pickups at the airport right now,” said GCLA Director Matt Strack of Strack Premier Transportation. “We’ve been dealing with a lot of issues at LAX with the TNCs. From that, we’ve developed a partnership with the LAX Airport Police: They have our best interests in mind, and it’s how we’ve become friendly with some officers on the force.”

GCLA donated $500 to demonstrate its continued support of and gratitude for LAXPD and its efforts to uphold TNC rules, as Strack said that “a lot of other airports in the area are not enforcing the agreement.” As the Police Unity Tour raises funds for the National Law Enforcement Officers Memorial Fund, the added benefit of contributing to a worthwhile charity made GCLA’s decision to help out the LAXPD an easy one.

“We want to take care of the LAX airport police,” Strack said. “When they asked us to sponsor them, we certainly did. We like the cause, we enjoy working with them, and we have a friendly rapport with them.”

Strack added that GCLA “will definitely consider” making a donation to the Police Unity Tour each year if the airport’s police department continues to participate in the charity ride.

“We enjoy the relationship we have with the LAX airport police and the fact that they’re enforcing the rules,” he said. “We appreciate their work on the matter and we want to support them.”

Visit policeunitytour.com to learn more about the annual bike ride and gcla.org for more information about the GCLA.