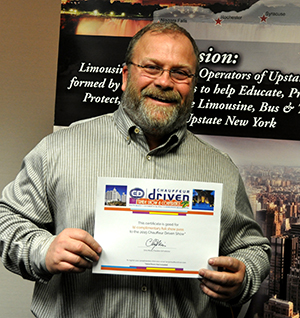 LBTOUNY Show Pass Winner Scott Pizzo of Park Place Corporate Transporation Syracuse, N.Y. — The Limousine, Bus & Taxi Operators of Upstate N.Y. (LBTOUNY) met on April 22 in Syracuse (a new location for the association that spans the entire upstate area) to discuss the situation with Uber and Lyft, an update on the sales tax repeal, and the upcoming Lobby Day in Albany, which is tentatively scheduled for May 20. Chauffeur Driven Managing Editor Susan Rose attended the meeting.

After some mingling and refreshments, LBTOUNY President Kevin Barwell of Giorgio’s Limousine Service kicked off the meeting with a brief overview of some old association business before turning over the mic to Katie Mitchell of National Interstate Insurance. Mitchell spoke about automatic event recorders and the different types available for the chauffeured transportation industry. She shared about a dozen videos that helped to establish what party was at fault when both claim innocence, and if any injuries occurred to passengers during the collision. The videos also showed if the transportation driver acted properly before, during, and after the accident—or if he should be retrained or dismissed.

It was back to business as Barwell spoke about the sales tax repeal, which the association has been fighting for years but had made tremendous progress on in the last legislative session. LBTOUNY launched a successful grassroots effort to gather support in the state senate, but the bill stalled in the assembly.

“The assembly felt that they would have a $24 million loss in the budget, so it wasn’t doable for them,” said Barwell. “We may not see an outright appeal but an exemption like in other states. The issue isn’t dead, but it’s slowed up a bit. Now that we have a voice, we can get the momentum going again.”

Barwell also noted that sales tax audits have become a little more aggressive and are hitting some transportation companies hard. “Anything is taxable that you charge to a customer, including tolls, water, everything except gratuities,” he said.

Immediate attention, however, is focused on stopping two bills that are currently in both houses that would exempt TNCs from all requirements that limousines, taxis, and buses face. Barwell notes that they were able to fight them aggressively in Buffalo, but Lyft has said it wants to resume operating in the city by July. LBTOUNY is organizing a Lobby Day in Albany; as of press time, the final date was not yet available pending a meeting schedule with state representatives. Other state associations are encouraged to join the event. In the meantime, the association has started an online petition against the state senate to push them to pass legislation that treats TNCs like transportation companies with the same regulations. The petition can be found at chn.ge/1J9EAYk.

Chauffeur Driven raffled off a pass to the Miami show, which will be held at the Loews Miami Beach Hotel this October 11-14. LBTOUNY Chairman Scott Pizzo of Park Place Corporate Transportation won the pass.

The next official meeting is scheduled for July, date to be determined, in Buffalo.