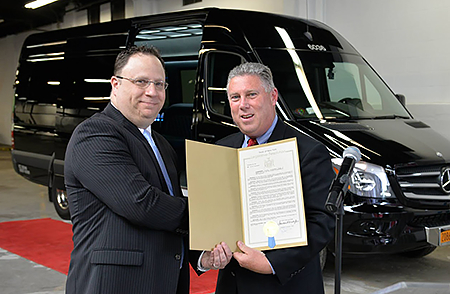 Owner David Brown accepting the Legislative Resolution from Assemblyman John McDonald Albany, N.Y. — Late last month, Premiere Transportation celebrated its 25th anniversary with a giant party at its headquarters. According to an article in the local newspaper, the Troy Record, the company began as Carey of Albany in 1990, but following a series of acquisitions, it became one of the largest chauffeur-driven transportation services in the area.

Food, drink, and music was provided and well over a hundred guests attended the party. Among the most notable guests were Albany Mayor Kathy Sheehan and Assemblyman John McDonald, the latter of whom presented Premiere Transportation with a Legislative Resolution. David Brown, Premiere’s president, gave a speech that detailed his beginnings at the company as a 24-year-old car washer and detailer, who then took over the company a year later. Brown also thanked his vice president and four of his longest-working drivers for 25 years of service.

Premiere also announced it would be rolling out its own mobile app, similar to Uber, that would allow clients to register an account, book online, see a photo of their driver, and track their vehicle’s location in real time.