L to R: GBTA Allied Leadership Council President Scott Solombrino of Dav El/BostonCoach, John Rose of iJET International, GBTA Executive Director and COO Michael McCormick, and David Seelinger of EmpireCLS Worldwide Chauffeured Services Orlando — The Global Business Travel Association (GBTA) held its 2015 convention July 25-29, which was one of the association’s largest conventions in its history with 6,389 attendees—including 1,366 travel buyers and more than 400 exhibitors on the show floor. Chauffeur Driven Publisher Chris Weiss was among those present for the multi-day event.

Much of the conversation focused on the sharing economy, competition, and technology: The future of not only airline competition but also travel distribution’s landscape, the choice to either disrupt or be disrupted, technology’s effect on the customer experience, customers’ desire for their booking experience to mirror the ease of their online consumer experience, and the rise of services like Airbnb and TNCs were among the timely topics explored across the conference’s five days.

As one of the largest gatherings of travel professionals in the world, the conference both draws from and delivers a wide swath of content to a membership base that spans six continents. The annual event brings together professionals from all walks of the travel industry for an event that offers panels, guest speakers, educational programs, and an expansive expo floor.

The 2015 conference heard from a number of speakers beyond the scope of the industry: actor Kevin Bacon, who discussed his Six Degrees Foundation that puts grassroots charities in touch with celebrities; Apple co-founder and philanthropist Steve Wozniak was interviewed by Fortune’s Nina Easton and spoke about technology’s impact on travel; and Fox News journalist Megyn Kelly spoke to GBTA’s Executive Director and COO Michael McCormick in a Q&A about her personal and professional life. 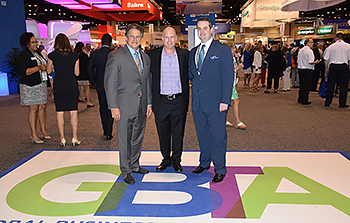 L to R: Edward Sakakeeny of Signature Livery, CD Publisher Chris Weiss, and Matt Assolin of Nikko’s Worldwide Chauffeured Services On Tuesday, July 28, McCormick led the four-person panel “Ground Transportation in a Sharing Economy.” He was joined by GBTA Allied Leadership Council President Scott Solombrino of Dav El/BostonCoach, David Seelinger of EmpireCLS Worldwide Chauffeured Services, and John Rose of iJET International. During the panel, new data was presented that showed how many companies have yet to implement a policy regarding employees’ use of TNCs for business-related transportation. The panelists agreed that while there are some impressive new technologies on the market, travel buyers need to ensure that such services will deliver a high Duty of Care standard. They also called for a level playing field to allow for a fair, competitive marketplace. A video of the half-hour panel can be seen at here.

Don’t miss the September issue of Chauffeur Driven, where you’ll find an in-depth interview with Seelinger and Solombrino expounding upon the topics they addressed at their GBTA panel, such as TNCs and the future of the ground transportation industry.