KLA Has Its Days at the Fair 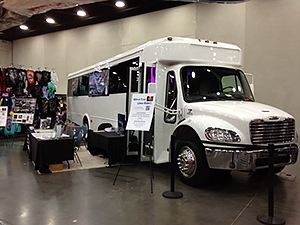 With a 16 percent increase in attendance from last year’s event, the KLA had ample opportunity to connect with scores of the 601,672 fair-goers traversing the event’s grounds. Increasing public awareness about the differences between TNCs and licensed ground transportation companies was a key goal for this year, and members spoke to those visiting KLA’s booth about their efforts to ensure the riding public’s safety. Two local police officers also took the time to impress upon the public that state licensed and approved companies are a safer transportation option than nonregulated TNCs. 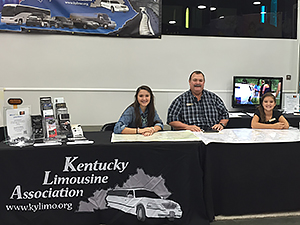 KLA member Val Newton of Regal Limousine gets some help manning the KLA booth from his daughters Chloe (left) and Emma This year’s display vehicle was a bus supplied by Xtreme Transportation, and the KLA’s booth also featured daily giveaways of gift certificates offering limousine rental discounts. The grand prize, which the KLA raffled off at the end of the fair, was a free four-hour stretch limousine rental provided by the association member whose operation is geographically closest to the prize winner.

In other association news, Xtreme Transportation—owned by KLA’s Treasurer Jenny Summit—has acquired a company located in Bedford, Ind., and has also purchased additional storage space in the Louisville area.

The next KLA meeting will be October 13.