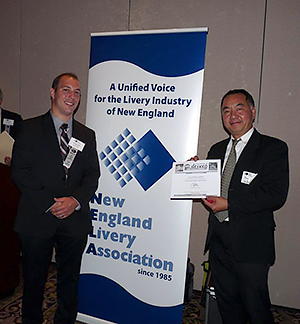 The evening’s educational component included a presentation from Agentis Safety Development CEO Brandon Dufour, who focused on the dangers of distracted driving. Other speakers included Scott Duffy of Don Brown Bus Sales, which was the dinner sponsor, and Brett Barenholtz of Boston Car Service. Chauffeur Driven provided a pass to next month’s Miami show, which was won by longtime NELA member Sonny To of 128 Coach.

With a handful of members preparing to attend a TNC hearing in Boston the following week, NELA Executive Director Rick Szilagyi said that this latest battle in the association’s ongoing fight against TNCs was a much-discussed topic at the meeting.

The hearing turned out to be an all-day affair, at which NELA had significant representation: Szilagyi, Scott Solombrino of BostonCoach/Dav El, NELA 1st Vice President Dave Lathbury of Black Tie Limousine, and Mike Fogarty of Tristar Worldwide were among those speaking on behalf of both the association and the industry.

Szilagyi said that the September 15 hearing saw a few regulatory wins, as Boston Police Commissioner William Evans voiced his support for TNC drivers being subject to fingerprint background checks; by the end of the day, it looked as though biometric background checks have potential to become a requirement that TNCs will no longer be able to sidestep. TNC insurance is also a high priority for the association, as on-again/off-again coverage does not provide adequate coverage for either the riding public or transportation providers.

The next NELA quarterly meeting will be its holiday party, scheduled for December 8.