FLA Executive Director and CD’s Industry & Brand Ambassador Philip Jagiela filled in for President Rick Versace of A1A Airport & Limousine Service, addressing the crowd and introducing the full slate of presenters who spoke at the meeting.

International Association of Transportation Regulators President Matt Daus of Windels Marx Lane & Mittendorf kicked off the meeting by providing an overview of TNC regulatory progress. After explaining why he recently used Uber for a ride in Florida—“You need to know your enemy; if you don’t, you’ll never beat them”—he said that the FLA collective has seen the most success in its fight against ride-sharing services and offered some advice for moving ahead in their campaign. 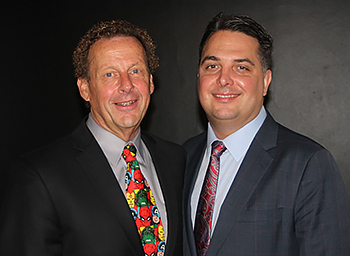 FLA Executive Director and CD Industry & Brand Ambassador Philip Jagiela (left) and International Association of Transportation Regulators President Matt Daus of Windels Marx Lane & Mittendorf “This battle is not over but you guys are winning it,” Daus said, noting that “now’s the time to double down” by hiring the right lobbyists, being mindful of resource allocation, and staying the course.

Daus went on to explain how TNCs violate the 14th Amendment’s Equal Protection Clause, giving legally operating, traditional transportation companies a leg up in that regard.

Those in attendance also heard from attorney Daniel Levine, who spoke about the differences between employee and independent contractor models; lobbyist Ron Book, who discussed ways to further the association’s TNC battle; Stuart Gold of miRide, which is gearing up to unite Florida’s chauffeured transportation operations under one app that offers a luxury experience as well as luxury service; and insurance agent Charles Caravella from Hawkeye Claims.

At the end of the meeting, several association members came forward to pledge additional monetary support to the FLA in order to help defray the costs of its lobbying efforts and other expenses necessary in maintaining the integrity of Florida’s transportation industry.