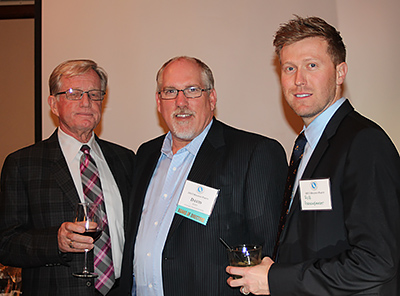 L to R: GCLA’s Lobbyist Gregg Cook of GAC Consulting, Treasurer David Kinney of API Global Transportation, and Lobbyist Rob Grossglauser of GAC Consulting Los Angeles—Greater California Livery Association (GCLA) celebrated the holiday season with a number of new and returning events this year, culminating with its annual meeting and holiday party December 15. Chauffeur Driven Editor Madeleine Maccar was among the many members and industry supporters who came from all across the country for the yearly Southern California event, which included dinner, raffle and auction items, and a celebratory end to the year.

The festive atmosphere didn’t distract from business, as association, legislative, and industry updates were all on the docket for the evening—including the announcement of who will comprise the GCLA’s 2016 board of directors: 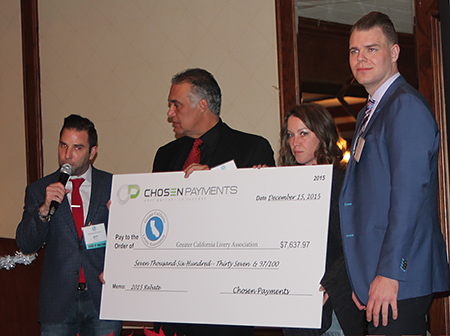 GCLA President Kevin Illingworth of Classique Worldwide Transportation (second from left) accepts a check for $7,637.97 from Jeff Brodsly (left), Sarah VanBeek, and Derek Maxwell on behalf of Chosen Payments After cocktails and mingling, President Kevin Illingworth, who will be serving for a second term, kicked off the evening’s meeting with an overview of the past 12 months, which he called “just a tremendous year” that saw a number of wins for state operators. Presentations included those from event sponsors Acton SoCal Penske Professional Vehicles and Book.limo, as well as GCLA Director Gary Bauer, who is running for the At-Large seat on the NLA board and discussed how important it is to keep California and its efforts at the forefront of the industry’s awareness.

Throughout the evening, GCLA Vendor Member Jeff Brodsly auctioned off the many donated prizes, which included gift baskets, opportunities to spend a day learning from some of the most recognizable names among the region’s operators, discounted services, and software—as well as items donated by Chauffeur Driven: a pass to the New Orleans Executive Retreat in May, won by Ady Genick of VR Worldwide; a pass to October’s CD Show in Washington, D.C., which was won by Joe Magnano of CLI Worldwide Transportation; and an eblast, won by Harry Dhillon of Ecko Worldwide Transportation. Proceeds of the auction benefit the GCLA, helping it to shoulder its operating and legislative costs.

Legislative updates were provided by the association’s lobbyists, Rob Grossglauser and Gregg Cook, and 46th District Assemblymember Adrin Nazarian. Grossglauser and Cook both addressed the reactionary nature of legislation and how it’s often a retroactive effort—in this instance, speaking of the law following the fatal 2013 limousine fire that mandated a fifth-door safety requirement on all stretch vehicles. After tirelessly appealing to elected officials—with Grossglauser giving extra kudos to GCLA board members David Kinney and Chris Quinn for being “the faces of the association” and discussing with legislators just how costly and ineffective such a law would be in practice—the original law’s extensive retrofitting has been replaced by a requirement calling only for pop-out windows to serve as emergency exits. 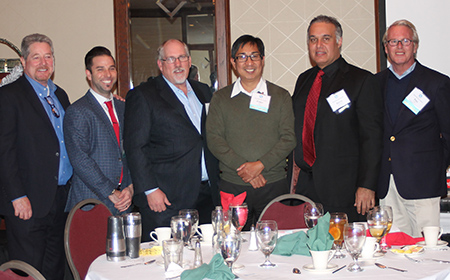 The 2016 GCLA board includes (L to R): John Raftery of Executive Limousine & Coach, Jeff Brodsly of Chosen Payments, David Kinney of API Global Transportation, Perry Barin of Music Express Worldwide, Kevin Illingworth of Classique Worldwide Transportation, and Phillip Hartz of Acton SoCal Penske Professional VehiclesAssemblymember Nazarian—whom Cook lauded as “looking for public-safety resolutions, not playing party politics”—implored all those in attendance to be present for GCLA’s upcoming Day on the Hill and to continue advocating for a more level playing field as TNCs continue to see less stringent regulations than both chauffeured ground transportation operators and taxis.

With Super Bowl 50 touching down in Santa Clara, Calif., in early February, Maurice Brewster of Mosaic Global Transportation called for anyone with Sprinters and SUVs available on game day to help transport passengers to and from the arena.

As the evening came to a close, outgoing board members Gary Buffo of Pure Luxury Transportation and Alex Dharbahani of KLS Transportation Services were honored for their contributions to the GCLA. Chosen Payments was also recognized as being its largest donor—a designation underscored by the check Jeff Brodsly, Sarah VanBeek, and Derek Maxwell presented to the association at the evening’s close.

GCLA’s next event is its Day on the Hill in Sacramento, which will be held February 10.