Annual UMA Expo Is Another Hit 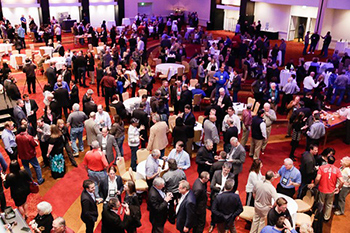 The UMA Expo gives motorcoach operators a chance to learn more about the industry and network Atlanta — The United Motorcoach Association (UMA) Expo took to Georgia’s capital city from January 31 to February 4 for a few days packed with information about the newest in motorcoach trends and equipment, education catering to industry veterans and newcomers alike, and plenty of networking opportunities among conference-goers. Chauffeur Driven was among the hundreds of exhibiting vendors, with Publisher Chris Weiss and Director of Events Jess Pavlow representing the CD team.

The theme of the 2016 Expo was “Where great businesses are built,” and much of the event’s offerings catered to that message by helping attendees learn how to diversify and grow their companies while expanding their professional networks. Many of the classroom-style educational offerings focused on marketing, finance, operations, and even smaller businesses, while the bigger sessions tackled topics such as embracing technology, purchasing pre-owned vehicles, and passenger safety. For an bird’s-eye view of the motorcoach industry, the 12th UMA Annual State Association Summit, held on the Expo’s first day, where industry leaders discussed the Highway Bill, CDL testing, and a range of legislative and operational concerns on a state-by-state basis.

Networking was a significant component of the conference, and attendees had nonstop opportunities to get to know one another, starting with the first day’s Welcome Reception and including the UMA Expo Sneak Preview After Party, held at the World of Coca-Cola, as well as the music-filled UMA Leadership Awards Celebration that honored UMA members who have proven to be dedicated industry representatives. The 2nd Annual Go Motorcoach Fundraiser and Party was another successful event benefiting the Go Motorcoach Campaign, which helps increase public awareness of the advantages of motorcoach travel.

We’ll be offering an extensive look at the UMA Expo in the March issue of Chauffeur Driven.