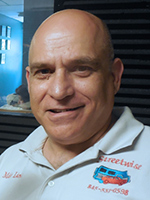 Michael Earl, COO of Streetwise Miami — Blackstone Coachworks of South Florida recently announced that Michael Earl of Streetwise Transportation in Middletown, N.Y., has joined its sales force, spearheading the company’s efforts in the Northeast. Earl will continue in his role of COO for Streetwise.

Al Tortora, president of Blackstone, said he is pleased to work with Earl again. The two have a professional relationship dating back 30 years when Earl worked for Empire Coach Builders in Brooklyn. “I am anxious to work with Michael again,” said Tortora. “He knows the industry and knows the needs of the clients. I’m certain that he will be an asset to the company.”

Earl is similarly enthusiastic about the opportunity. “Al gave me my start as a young man, and we’re a great fit. I look forward to offering the fine vehicles produced by Blackstone.”