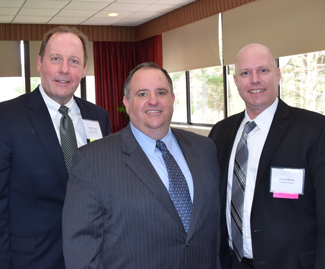 TLPA President Dwight Kines, LANJ President Jason Sharenow, and CD Publisher Chris WeissPrinceton, N.J. — The Limousine Association of New Jersey (LANJ) returned to the NJHA Conference and Event Center on March 16 for a meeting that included owners and vendors from across the greater New Jersey, New York, and Pennsylvania area as well as special guest speakers. Among the 70 people in attendance were Chauffeur Driven’s Publisher Chris Weiss and Assistant Editor Rob Smentek.

Sponsored by Vehicle Tracking Solutions, this was the first meeting under the leadership of new LANJ President Jason Sharenow of Broadway Elite Chauffeured Services Worldwide, who assumed the role from Jeff Shanker. Sharenow expressed his thanks to the attendees and let them know that he is honored by his new role in the organization. Jon Epstein of Royal Coachman Worldwide will serve a joint role as treasurer and first vice president. 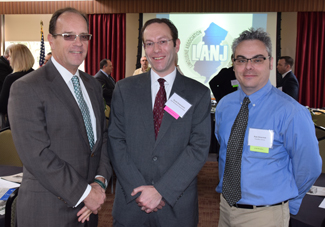 Howard Gogel of MyLimo, Scott Greenwald of AAA Worldwide Transportation, and CD Assistant Editor Rob SmentekAfter thanking the sponsors, Sharenow opened the meeting with news about the continuing battle with TNCs at the Newark airport. He reported that the chauffeured ground transportation has allies in the Newark and Elizabeth police departments; both are actively enforcing current limousine laws and regulations, with the city of Elizabeth taking a particularly strong stance. Unfortunately, the Port Authority has a much more lenient position and is not ticketing TNCs.

Next, LANJ members took the spotlight as Sharenow introduced the group’s two new board members, Howard Gogel of MyLimo and Scott Greenwald of ‎AAA Worldwide Transportation. Both men have been LANJ members since 2006. The LANJ Member Spotlight then offered three members the opportunity to introduce themselves to the group. Jason Messinger of BBZ Limousine & Livery Service, Brett Barenholtz of Boston Car Service, and Jordan Sanders of Hollowsands Luxury Limousine each took a minute to speak about their business offerings.  Next, Jim Luff from Chosen Payments was given the opportunity to speak about his company’s services to the industry, and the firm’s devotion to associations like LANJ. 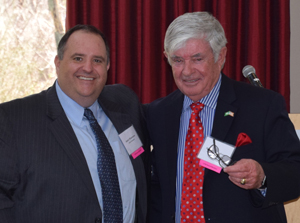 Jason Sharenow with Michael Renehan of Concorde Worldwide, the winner of a pass to CD’s Executive Retreat in New OrleansAs part of the meeting’s educational component, Ralph Bitter, supervisor, diesel enforcement of the New Jersey Department of Environmental Protection, presented a slideshow about the state’s idling regulations. Bitter encouraged operators to limit their idling in order to reduce harmful emissions. Next was the meeting’s keynote presentation by Hannah Haverdink of The LMC Group. Entitled “How to Properly Onboard a New Chauffeur,” the lecture delved deep into the HR process to help owners run a more efficient hiring process that meets state laws and regulations.

Dwight Kines, President of the Taxicab, Limousine & Paratransit Association (TLPA). Kines made the trip from Baltimore to express his admiration of LANJ and to encourage the two associations to work together when meeting with government officials about the TNC situation. Kines also invited LANJ members to attend the TLPA’s Spring Conference & Expo, which will be held April 21-23 at the Grand Hyatt in New York City.

Sharenow concluded the meeting by reminding attendees about CD’s upcoming New Orleans Executive Retreat. A pass to the event was raffled off and won by Michael Renehan of Concorde Worldwide.

The next LANJ meeting to be held May 18 at the Wilshire Grand Hotel in West Orange. This nighttime fundraiser event will feature an auction and dinner.