NELA Hosts an Evening of Speakers 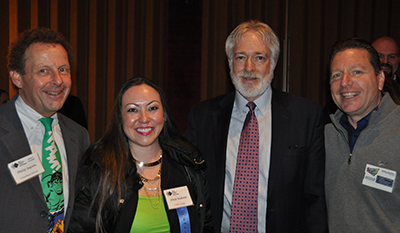 L to R: CD’s Industry & Brand Ambassador Philip Jagiela, Aleja Seabron of The LMC Group, NELA Executive Director Rick Szilagyi, and Arthur Messina of Create-A-CardSaugus, Mass. — More than 100 members and supporters of the New England Livery Association (NELA) attended its March 15 meeting, including Chauffeur Driven Industry & Brand Ambassador Philip Jagiela. The evening event included a variety of speakers, updates about both the industry and local goings-on, as well as a array of prizes.

Laurie Cantwell of MV1 Insurance and Sarah Vanbeek of Chosen Payments both discussed their companies’ initiates to garner new NELA members. Aleja Seabron of The LMC Group and Brett Tyson of TDC Training Specialists both spoke about their involvement in NELA’s upcoming April 4 Driving Education series of seminars; Seabron will discuss social media and online marketing while Tyson will be the day’s keynote speaker.

NELA Executive Director Rick Szilagyi then spoke about the association’s efforts to battle TNCs, which includes almost 10 new bills introduced in Rhode Island in the week prior to the meeting and its retention of a “Dream Team” comprising lobbyists and lawyers who are assisting the association in its continued pursuit of a level playing field and regulations promoting public safety. Outside legal assistance does, however, require at least $20,000 per month to retain that help; Szilagyi thanked those who have provided the biggest monetary contributions and implored others to become financially invested in the battle. 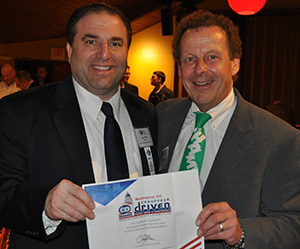 Lew Aflalo (left) of Green Light Limousine, who won a pass to the Chauffeur Driven Show in Washington, D.C., and CD Industry & Brand Ambassador Philip Jagiela Szilagyi then introduced Jagiela, who spoke about how visiting with operators and associations throughout the country has allowed him a firsthand perspective on how the industry is handling TNCs on a national scale. Jagiela shared some insight he gained from legislators when participating in the Greater California Livery Association’s Day on the Hill last month: “We will never be able to bring TNCs to the limousine’s industry current standards; however, under consideration is finding a middle ground and make all commercial providers adhere to the same standards and regulations.” Jagiela also spoke about CD’s 2016 events, raffling off a pass to the Chauffeur Driven Show in Washington, D.C. that was won by Lew Aflalo of Green Light Limousine.

Mike Fogarty of Tristar Worldwide, who is also the immediate past president of Taxicab, Limousine & Paratransit Association, then thanked Szilagyi and NELA for the association’s active approach to speaking for the industry’s New England operators. He also expressed his pleasure in seeing a cooperative relationship emerge between taxis and our industry as both continue to grapple with TNCs.

The speakers concluded with Michael Campbell of Grace Limousine, NLA’s Northeast Regional Director, who discussed the benefits of membership in the national association and spoke about its upcoming Day on the Hill, scheduled for April 26-27 in Washington, D.C.

NELA’s next event is Driving Education on April 4; its next meeting is June 14.