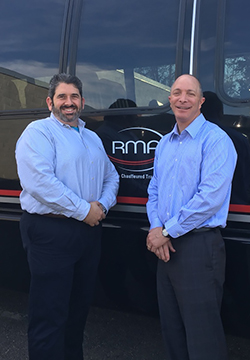 Shanker, whose first day with the company was February 29, says that his new role “was the perfect move that came at the perfect time” after it became less of an “if” and more of a “when” through increasingly serious discussions with RMA President/CEO Robert Alexander.

“Robert used to say ‘You’ll be working with me one day’ or I’d say ‘One day, I’ll be working with you’ whenever we saw each other,” Shanker says. “Then we had a conversation about it at the Chauffeur Driven Show in Miami, and we’ve been exploring the possibility since then.”

In fact, Shanker says that much of the appeal of working at RMA stems from Alexander himself, saying that the company’s owner “inspires greatness in others” from leading by example—and fostering a work environment that encourages success through both hard work and camaraderie alike.

“Robert and the RMA team are passionate and professional, the facility is state-of-the-art, and just the other day, I walked into the office while the reservations staff was cheering about how many reservations they’d booked in a short amount of time,” Shanker says. “We deliver service that we call ‘RMA Perfect’: the ride will be perfect, your chauffeur will be perfect, and the experience will be perfect.”

Shanker joined RMA in his second year of serving as the president for Limousine Association of New Jersey (LANJ)—one of the industry’s largest associations with nearly 150 members—where he had spent much of his time at LANJ’s helm lobbying for both passenger safety and a level playing field as TNCs continue to threaten chauffeured ground transportation. He believes that RMA’s dedication to quality is demonstrative of how the industry can best digital ride-hailing services.

“Will the TNCs of the world affect ground transportation? They will to a point, but we’ll overcome them with high-quality service,” he says.

With kudos and congratulations from the industry pouring in through calls, texts, email, and Facebook messages since he announced his new role, Shanker is looking forward to this next chapter in his career and eagerly embraces his future at RMA.

“This is just about the happiest I’ve been since the day I started dating my wife,” he says.