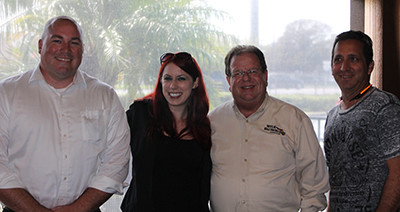 WFLA President Jeremy Jenkins of His and Hers Limousines kicked off the meeting by imploring those in attendance to stay the course of corporate work as TNCs continue to dog the Florida chauffeured transportation scene, as well as continuing to attend industry events to help create a wider networking reach.

Maccar then spoke about the value both the magazine and events aim to bring to the industry, and how input from operators are what help Chauffeur Driven deliver the content they seek. She also raffled off a pass to the Executive Retreat in New Orleans, which was won by Gus Shahin of Luxury Transportation Limousine.

With NLA’s Day on the Hill slated for next month, the legislative event is at the forefront of many operators’ minds, and Jenkins shared his previous experiences of walking the halls and meeting with elected officials throughout the history of the annual event. 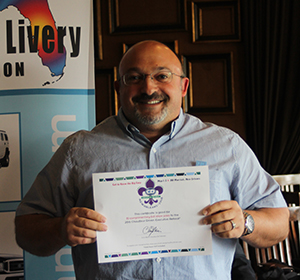 The discussion shifted to the March meeting of the Hillsborough County Public Transportation Commission (HCPTC), which was attended by two WFLA members. While TNC operations are currently illegal in the county and their drivers are being ticketed, members are concerned that “a lack of recourse” for collecting on those tickets won’t curb the problem; however, they also hope that the public will take note of how often TNC vehicles receive citations and “will begin to realize that they are not kosher organizations.” 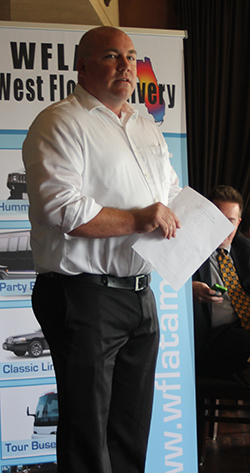 WFLA President Jeremy Jenkins of His & Hers LimousinesMembers’ optimism was cautious, though, feeling that they have only a year’s reprieve before the TNC battle rears its ugly head once more: “Rest assured, Uber will be back,” Jenkins warned. “We can’t just sleep until next year—we have this year to figure out how to fight Uber when they do come back.”

As operators in the Tampa area and throughout the state have been working closely with Florida’s taxi drivers, the “tireless efforts” and lobbying donations of Lou Minardi, president of the Yellow Cab Company of Tampa, were spoken of as being instrumental in effecting local regulatory change.

“Lou is in Tallahassee more than some Congressmen!” WFLA Executive Director Dave Shaw observed. “I’m proud that he’s in the Tampa area, fighting for us—and winning.”

Minardi’s work was also praised for being instrumental in helping to kill HB-1439, a Florida House bill that would have prevented HCPTC from banning TNCs, as was that of Senator Athenia Joyner, who WFLA members were quick to refer to as a friend of the association. Brook Negusei of Luxury Transportation of Tampa Bay echoed the call for the two industries to work together, saying that while chauffeured ground transportation hasn’t suffered the way taxis have at the hands of TNCs, some aspects of the industry taken a significant hit from them.

“Some of those taxi guys are putting out $100,000 a year for this fight—our weekend trips are dying and we need to stick together,” Negusei said.

WFLA’s next meeting will be May 18.