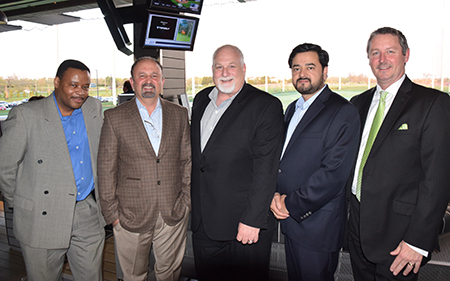 VLA President Paul Walsh of Superior Executive Transportation opened the meeting by welcoming the attendees and thanking Reston. Before giving the floor to Barry Gross, Reston’s director of business relations, Walsh expressed his desire to work closely with neighboring associations like the Virginia Motorcoach Association (VMA) and United Motorcoach Association (UMA), and then took some time to thank the VLA board for their hard work. Gross, who shared a brief history of Reston and the company’s services, invited attendees to tour their new motorcoach after the meeting.

Weiss was next to address the attendees with a “Sign of the Times” presentation that offered a detailed look on industry news and trends. First on his agenda was an update on the TNC situation: Based on recent developments, Weiss believes that there is a shift occurring that will require ride-sharing companies to conform to regulations around the country. The amount a bad press that TNCs are facing will likely level the playing field, forcing all drivers to undergo fingerprinting and background checks. Weiss also focused on the improving economy, evidenced by the sales stability and growth seen in recent months, as well as the rise of mergers and acquisitions in the industry. He also recognized the trend towards larger vehicles—including shuttles, minicoaches, and motorcoaches—noting that fleets with these vehicles are essentially “Uber-proof” the TNCs cannot compete with this type of work. He also provided details about CD’s upcoming events, with Art Miesemer of RMA Worldwide winning a pass to the October 9-12 Chauffeur Driven Show in Washington, D.C. 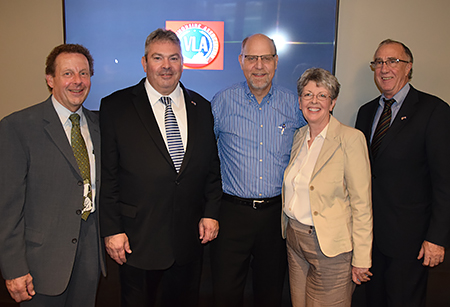 Members of the VLA board include (L to R): Executive Director and CD Industry & Brand Ambassador Philip Jagiela, President Paul Walsh of Superior Executive Transportation, Vice Presidents Barry Shapiro of James River Transportation and Andrea Saathoff of Albermarle Limousine, and Legislative Liaison/Immediate Past President Glenn Stafford of Love Limousine Next, William Lanham, who manages the Metropolitan Washington Airports Authority (MWAA) landside contracts, discussed issues faced by operators at the regional airports. In addition to thanking attendees for their patience while a new AVI system was installed, Lanham informed the group that geofencing has been placed around the holding lot, which limits TNC service unless vehicles are within the region; however, he mentioned that 30-40 thousand vehicles are registered in the area. Lanham then offered information regarding the fines issued at the airport, and concluded by sharing that his agency has a strong interest in maintaining a close relationship with the VLA.

Lanham was followed by Ralph Buona of the Loudon County Commission and Barbara Arkwright, a special agent from the law enforcement division of the Virginia DMV. Buona provided a presentation about the benefits of living and working in Loudon County. Arkwright introduced two new field members, and discussed penalties for “off-app” activity by TNCs. She also expressed the DMV’s commitment to attend VLA meetings and work with the chauffeured ground transportation industry.

As many operators are expanding their fleets to include motorcoaches, Director of Regulatory Affairs for the American Bus Association Brandon Buchanan offered a comprehensive overview about what limousine operators need to know when entering the bus business. Among the topics he covered were the FAST Act (i.e., Highway Reauthorization Bill) and the importance of compliance, especially in regard to hours of service, equipment, and the Bus Lease and Interchange Rule.

Brian O’Neill of Wolfington Body Company brought one of Turtle Top’s new VT3s for a sneak peek preview after the meeting, and James Brown of the VMA reiterated his association’s desire to work closely with the VLA.

The meeting closed with a formal installation of Jagiela as the VLA’s new executive director. He discussed his plans for the association, which will begin with a redesigned website and increased social media presence.

The next VLA meeting is scheduled for June 6.