Windy City President George Jacobs admits that he's been in a "buying frenzy" recently and that the three buses are among a spate of vehicle additions. And while he has been purchasing from an array of companies, these buses and the dealer through which they were purchased, ABC Companies, made the transaction especially memorable.

"The product itself is a wonderful product, and I’m so thrilled with the way they’ve treated us," Jacobs said. "It means a lot to me that they’re willing to do things to make us feel special."

Jacobs credits Tony Simon of Reston Limousine for inspiring some outside-the-box thinking in terms of drawing up a purchasing deal for the buses. 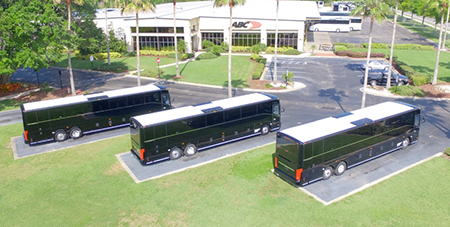 Windy City recently purchased three Van Hool buses from ABC Companies"Tony was working on a deal for himself with Van Hool," Jacobs said. "He did all the hard work and I just really came in and copied his hard work. Tony came up with some ideas that I would not have thought of, which made it go from a good deal to a great deal."

The three buses were driven from Florida to Windy City, where a team was waiting to put the company logo on each one so the new vehicles could hit the road as soon as possible. They're already transporting people as far as Washington, D.C., and Jacobs couldn't be happier.

"We've sent them out everywhere, and they're running so well," he said. "These are the first three of many. We’ll be buying more."