WMLA Reestablishes Itself as D.C.-Area Association 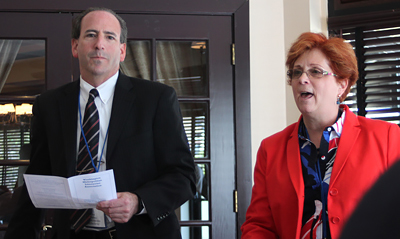 WMLA’s President Paul Rodberg of Reliable Limousine and Executive Administrator Mary Presley Rockville, Md. — The Washington Metropolitan Limousine Association (WMLA) is currently experiencing a growth period, and CD Editor Madeleine Maccar was among the more than 50 people in attendance for its reorganizational meeting on April 19.

President Paul Rodberg of Reliable Limousine has retained his previous position while naming Mary Presley as WMLA’s Executive Administrator. Rodberg provided a brief overview of the association’s past and plans for its future, while Presley spoke about her more than 30 years of experience with buses and luxury motorcoaches, as well as her executive positions with five other transportation-related organizations, including the Maryland Limousine Association (MLA).

Both Presley and Rodberg stressed the urgency of member support in helping the association become a viable force for and asset to the region’s operators, and how working together will help them speak with a louder, more unified voice. 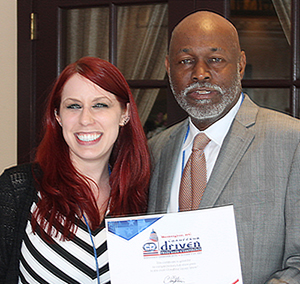 CD Editor Madeleine Maccar and Reggie Tymus of Capital City Limousine, who won a pass to the 2016 Chauffeur Driven Show “Our goals for today are to find out what everyone wants from this association—we have all the players on hand for an organized board,” Presley said, as board nominations were both announced and accepted at the meeting. “We need your support as members: In terms of industry interest, we do already have the support of several manufacturers and the ABA (American Bus Association).”

Industry unity was a significant theme of the meeting, and Rodberg and Presley also opened up the floor to questions and suggestions about where the association is heading, which is a future largely hinged upon both current and prospective members’ visions. Conversations touched on a potential name change, regular newsletters to keep all members informed of association goings-on, educational offerings, and the possibility of creating a D.C. metro-area chapter unifying the region’s operators, vendors, and associations—which all agreed would require additional discussion. 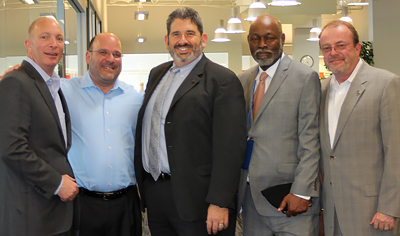 L to R: Robert Alexander of RMA Worldwide Chauffeured Services, Tony Simon of Reston Limousine, Jeff Shanker of RMA Worldwide Chauffeured Services, Reggie Tymus of Capital City Limousine, and Art Miesemer, of RMA Worldwide Chauffeured Services at the RMA site visit that followed the meeting As MLA President Joanna Fridinger of The Limo Lady was present for the meeting, the possibility of merging WMLA with Maryland’s state association was presented, though also ultimately tabled until MLA’s own reorganizational meeting scheduled for June 21, allowing its current members to also weigh in on the suggestion. Operators working in both associations’ regions compared and contrasted the different concerns specific to each, with the peculiarities of operating in a state versus the capital district serving as one of the most highlighted nuances.

Before the meeting came back around to lighter topics such as fundraiser ideas and possible social outings to foster an even stronger network among the area’s operators, Maccar spoke to attendees about how Chauffeur Driven aims to help operators with its content and associations with its meeting attendance and coverage. She also raffled off a pass to the 2016 Chauffeur Driven Show in Washington, D.C., from October 9-12, which was won by Reggie Tymus of Capital City Limousine.

After the meeting, Robert Alexander, Art Miesemer, and Jeff Shanker of RMA Worldwide Chauffeured Services invited attendees back to their newly renovated facilities for a site visit, offering office tours, vehicle showcases, and a chance to meet with the many people who work behind the scenes.

WMLA is currently planning its next meeting. Anyone interested in becoming a member, volunteering meeting space, or exploring sponsorship opportunities for future meetings and events is invited to email Presley at tourtrvl@comcast.net.