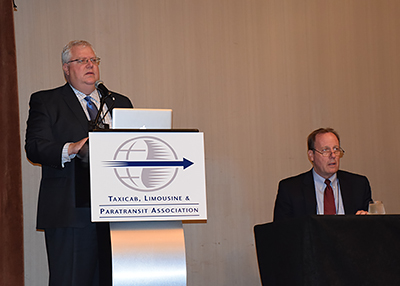 Immediate Past President and Chair of the Nominating Committee Mike Fogarty (left) of Tristar Worldwide and TLPA President Dwight Kines of Transdev on Demand New York — From April 21-23, the Taxicab, Limousine & Paratransit Association (TLPA) 2016 Spring Conference & Expo delivered its intimate-setting education, networking, and exhibit hall to the nearly 350 people flocking to its Grand Hyatt New York locale. CD’s Publisher Chris Weiss was on hand for the event, as he serves on the association’s Limousine Steering Committee.

The first day of the Expo kicked off with a number of meetings, including the open meetings of both the Taxicab and Paratransit steering committees. And since no first day of an event is complete without a capstone opening ceremony, cocktails were served at an evening reception in the Expo Hall to greet attendees and offer them a sneak peek of the Expo’s many exhibits. 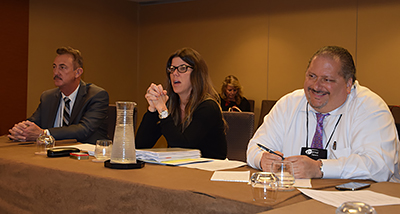 Additional presenters at the general session included: TLPA President-Elect Bill Scalzi of Metro Taxi, who also spoke about TNCs and TLPA’s Taxicab Business Model Review Task Force, of which he is Committee Chair; John Boit of PR firm Melwood Global, who discussed the association’s new website and its shifting PR campaign that will focus less on attacking TNCs and more on highlighting the attributes of legally operating transportation options; and International Association of Transportation Regulators President Matt Daus of Windels Marx, who explored TNCs’ impact on everything from driver wages to underserved communities to the environment.

After lunch, TLPA’s Limousine Steering Committee met to discuss topics like its educational agenda for the year, promotions and recruiting ideas to encourage membership, and public relations initiatives. Updates about TLPA’s legislative, regulatory, and legal efforts were also key topics at the meeting. 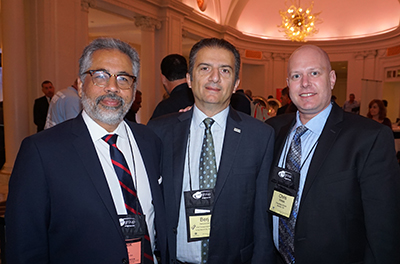 L to R: Tarek Mallah of Karhoo, Berj Haroutunian of Vital Transportation, and CD Publisher Chris WeissThe day continued with a presentation from the Women in Transportation Committee, as well as two sets of three concurrent sessions focusing on the individual demands of the association’s taxicab, limousine, and paratransit operators.

For the final day of the Expo, attendees had the option of embarking upon one of two company tours, either Verifone or CMT Group, both of which were Bronze Sponsors for the event, before the conference was adjourned.

There will be expanded coverage of the TLPA Spring Conference & Expo in the June issue of Chauffeur Driven.

TLPA’s next event is its Mid-Year International Leadership Conference in Toronto, Ontario, July 20-23.