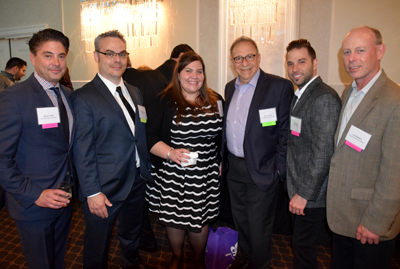 “It’s always nice to see the group get together and give back to the association,” said Trabb. “I think the evening setting helped people be more relaxed, more and treat the event more like an occasion than just another meeting.” 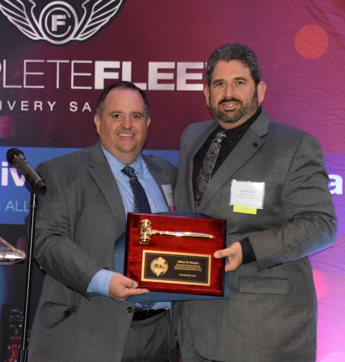 LANJ President Jason Sharenow of Broadway Elite Chauffeured Services Worldwide presents a plaque to former LANJ President Jeff Shanker of RMA Worldwide Chauffeured Transportation for his years of service to the association Sharenow then recognized two individuals for their dedication to LANJ. First, previous LANJ President Jeff Shanker, now with RMA Worldwide in Rockville, Md., was presented with a plaque for what Sharenow described as “laying out the framework” for the success of the association; next, Jim Moseley, also a past president of LANJ who retired from the industry earlier in the year, was gifted a clock for his years of service.

Coincidently, the auction event was held on the eve of an important hearing in the N.J. State Legislature. In the association update Sharenow provided to the evening’s attendees, he detailed the testimony that he would deliver the next day in support of two proposed bills, AB-3695 (“Uber Bill”) and AB-3696 (“Limousine Bill”), which were designed to level the playing field between TNCs and the chauffeured ground transportation industry. Among the items in the Uber Bill are mandatory background checks and fingerprinting for TNC drivers. The Limousine Bill deals with new insurance provisions and the removing sales tax from limousine services, from which TNCs are exempt. Mike Delamater, legislative director for the NJ Assembly, was on hand at the auction to provide some further insight into the bills.

After dinner was served, the auction got underway. As he has every year, Peter Corelli of Lakeview Custom Coach once again filled the role of auctioneer, encouraging members to be generous with their bids. A wide array of donations was up for auction, including items like sports memorabilia, event tickets, wine baskets, professional services, and gift cards. CD contributed a full-page advertisement, a pass to next year’s Executive Retreat, and a pair of certificates for October’s Chauffeur Driven Show in Washington, D.C. The ad was won by Billy Reitman of Intek Leasing; Joe Gulino of Gem Limousine Worldwide took home the Retreat pass; and the D.C. certificates were awarded to Mike Rose of Flyte Tyme Worldwide Transportation. The auction’s big ticket item, a set of eight custom conference room chairs, was won by Jeff Brodsly from Chosen Payments. In total, the auction, and accompanying 50-50 raffle, raised more than $21,000 for the association. Trabb estimates that the auction events have raised a total $200,000 for LANJ over the years.

To close the event, Sharenow invited a few attendees to speak, including Weiss, who recognized the generosity of LANJ members and provided a brief overview of the Chauffeur Driven Show. National Limousine Association Executive Director Sarah Gazi closed out the night by presenting LANJ with a rebate check for $7,422.

The following day, Sharenow and other LANJ members—including Corelli, Michael Barreto of Flyte Tyme Worldwide Transportation, Rich Badalamenti of Music Express, and board members David Seelinger of EmpireCLS Worldwide Chauffeured Services and Michael Renehan of Concorde Worldwide—headed to Trenton to testify before lawmakers about the bills at hand. Ultimately, the day was a rousing success with the Uber Bill passing through the assembly with a staggering 11-0 vote (2 legislators abstained). The Limousine Bill was even more successful, as it was passed with a 14-0 vote.

The next LANJ general meeting is September 28.