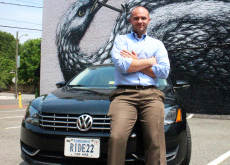 BioRide Owner Jesse Mobley Henrico, Va. — Richmond Limousine has announced that they have finalized a deal to purchase BioRide, a grease-powered car service founded in 2010.

The deal marks the second change of ownership for BioRide in the last 12 months. Founders Jeff and Joey Anderson sold the company last May to Jesse Mobley, who in turn worked the deal to sell to Richmond Limousine owner John Oulton.

While the terms of the BioRide deal are confidential, Oulton said the combined companies are driving toward $2 million in annual sales. Richmond Limousine had about $1.1 million in revenue last year. BioRide did about $500,000 in 2015.

The two sides became acquainted by referring business to one another, particularly BioRide farming out work to Richmond Limousine’s mini-buses.

Both companies had reached a point of needing to make investments for growth. BioRide was contemplating making the leap to purchase larger vehicles and Oulton said he was looking for a way to keep Richmond Limousine’s growth trajectory going.

“Our growth for the last seven years has been huge,” Oulton said. “It gets a little harder to keep that same growth rate.”

For BioRide, Oulton said, “They were at the point where they were farming out a considerable amount of work. It was time to look at a major investment in vehicles.”

Added Mobley, “(Oulton’s) got the fleet and the resources that BioRide was looking to get, and he’s proven operationally that he can handle the large passenger equipment and frequency of reservations.”

“Together our revenue and fleet will certainly be one of the biggest in Richmond,” Mobley said. “There should be no reason why we can’t become the biggest (locally based) transportation company shortly.”

The BioRide brand will remain, for now, and be used as a separate brand within Richmond Limousine. Mobley said the goal is to eventually merge the two monikers.