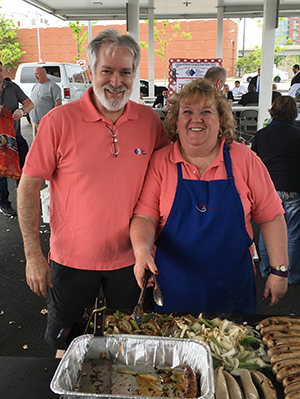 The day is one of NELA’s most popular events of the year, with the association’s board and general members rallying together to grill up the hot dogs, burgers, and sausages that would feed about 1,000 hungry chauffeurs—with nearly 20 NELA members working during the event’s peak hours, making sure that the vegetables are sliced, the grills are running, and everyone gets a hot lunch.

“It’s a great event,” Benson said. “It’s all volunteers who are there working, setting up, and cooking non-stop for the entire time that we’re there.”

What started with smoky barbecues and often-depleted food supplies has become “a well-oiled machine” that boasts commercial grills and even a concession-stand counter, according to NELA 2nd Vice President Tina Benson of L.A. Limousine. Benson has been involved with the event for much of its history—to the extent that her brother Carl Varney and sister Cindy Crisp often step up to help out, too—and keeps coming back every year because of the camaraderie. 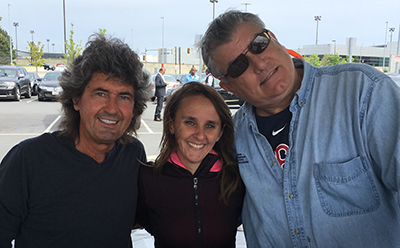 L to R: Mark Mollica of Black Tie Limousine, Lynda Saitta of Momentum Drives, and Steve Crispo of Research Underwriters In a truly cooperative effort, Benson said that Massachusetts Port Authority, which owns and operates Logan Airport, is “very helpful, setting up chairs and tables for everyone,” and that the event’s many Gold, Silver, and Bronze sponsors helped make the whole day possible—including donated prizes, like the 10 free oil changes that sponsor Sullivan Tire & Auto Service provided. Other prizes included two sets of Red Sox tickets and a lottery tree.

The event also serves as an opportunity for NELA to let chauffeurs know that it’s supporting them and their livelihoods with its ongoing legislative, educational, and lobbying efforts in pursuit of better safety and a more level playing field for ground transportation companies as the TNC fight continues.

“It’s about thanking the chauffeurs and letting them know that the New England Livery Association is in their corner, to help make their jobs and lives easier by fighting Uber,” Benson said. “It’s a very successful, well-organized event, and just a really great day.”

The next NELA meeting will be June 14, while its next social event will be the 17th Annual George Colarullo Memorial Golf Tournament on August 16.