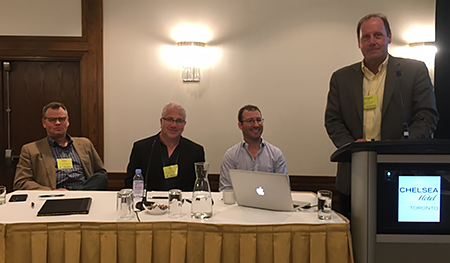 L to R: TLPA U.S. Vice President Mike Pinckard of Total Transit, Bill George of Kansas City Transportation Group, TLPA Director Jeb Corey of C & H Taxi, and TLPA President Dwight Kines of Transdev Toronto — Passenger transportation for-hire industry leaders from around the world headed to Toronto from July 20-23 for the Taxicab, Limousine and Paratransit (TLPA) Mid-Year International Leadership Conference, headed by association President Dwight Kines of Transdev. After attendees picked up their conference badges, they were welcomed at an open-bar cocktail reception sponsored by #Taxi/The Ride. Event-goers then enjoyed a free evening to familiarize themselves with Toronto and enjoy dinner on their own.

The first General Session kicked off the morning of July 21. Karhoo sponsored the AV equipment and meeting room where Kines welcomed attendees with an update about TLPA activities before Matt Ranen of Ranen Counsulting presented “Results of TNC versus Taxi/Livery App Platforms Study.” Attendees returned after a short morning break and listened to TLPA members Jeb Corey, Bill George, and Mike Pinckard share “Implementation of Alternative Business Models” before the group broke for a lunch sponsored by The Black Car Fund.

In the second General Session, John Boit of Melwood Global, TLPA’s Public Relations firm, updated attendees on the Who's Driving You and Fleet Forward initiatives. Later, Jeb Corey and Megan Bullock presented “National Marketing Report and Proposal.”TLPA members and conference sponsors Nick Quain of #Taxi/The Ride, Ira Goldstein of The Black Car Fund, Tarek Mallah of Karhoo, and Gilles Gomis of eCab made brief presentations about their products and services to the group.

Attendees at the TLPA Mid-Year International Leadership Conference held in Toronto An afternoon break was followed by Matthew Daus of Windels Marx speaking about “The Expanding TNC Equity Gap.” Reports were given from the Strategic Planning Task Force, Legislative/Regulatory Policy by Ed Kargbo, Responding to TNCs by Bill Rouse, and TLPA Organizational Ideas by Bill Scalzi. The packed afternoon concluded promptly at 4:30 p.m.—giving attendees another evening opportunity to explore the conference’s beautiful host city.

Friday morning began with a TLPA Board Meeting to discuss association business and a breakfast sponsored by eCab. After that, previously registered attendees for a special event were invited to present their tickets to board The Challenge, a 96-foot chartered sailboat, for a sail through Toronto Harbor. It was a welcome way to relax and adjourn the conference before the attendees returned to locales as far away as Australia and Europe to apply what they had learned during the conference.