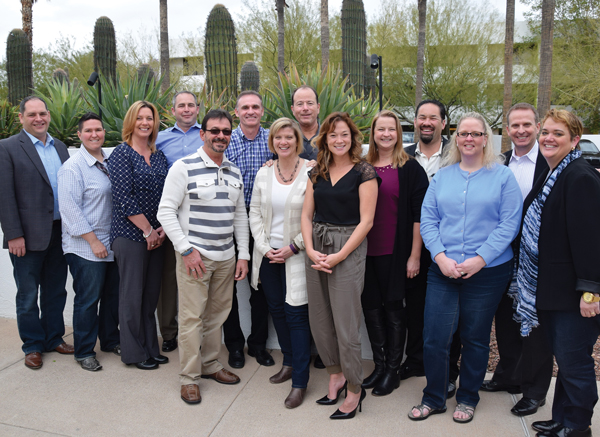 L to R: Greg Pruitt of Kings Worldwide Transportation, Chris Carroll of The LMC Group, Tracy Raimer of Your Private ­Limousine, Michael ­Callahan of Able Limousine, Tony Asaro of Desert Rose Worldwide ­Transportation, Paul ­Thompson of Accent Chauffeured Transportation, Laura and Jeff Canady of CLT Express, Hannah Haverdink of The LMC Group, Kyara and Ed Kahakauwila of L.A. Limousines, Gina Brennan of Corporate Car & Coach, Joey Allen of Kings Worldwide Transportation, and Kristen Carroll of The LMC Group Under the clear skies of Scottsdale, Ariz., the Rolling Thunder benchmarking group began its second year with a meeting at hotel and spa The Saguaro on January 14-15. Facilitated by industry consultants The LMC Group, the sessions offered discussion and education to the 11 owners in attendance, along with the opportunity to take part in an entertaining spin on a popular television program.

The sessions began with a working breakfast, where members shared their news and industry hot topics. But the group wasted no time as they dove straight into some deep benchmarking analysis.

“We track 250 separate monthly metrics, ranging from employee turnover by position to average trips per day by vehicle type, as well as cost per mile, maintenance costs by vehicle type, and truly every meaningful benchmark we have decided as a group to track,” said LMC Group founder Kristen Carroll. “It is a large effort, but the information provided enables our team members to make critical decisions regarding pricing, operations, and growth strategies.”

Hannah Haverdink, LMC’s director of business development, feels that members gain immediate value from the chance to see the raw data and compare it to their peers. “It provides a nice snapshot of what’s going on in the industry,” she added. After the initial benchmarking session and a review of 2015’s goals and performance, the group met for lunch, and then took part the meeting’s most talked-about event: The Shark Tank.

Similar in concept to the ABC show in which entrepreneurs pitch a product with the hope of receiving a cash investment from a panel of billionaires, the Rolling Thunder version gave members the opportunity to present a new service or product—existing or theoretical—to a group of industry experts in order to get some unfiltered feedback. Taking the place of the television program’s billionaires were a panel of judges that included Carroll, Scott Solombrino of ­­Dav El/BostonCoach, Chris Carroll of The LMC Group, and Chauffeur Driven’s Chris Weiss.

“This exercise really gave the groups’ personalities a chance to shine,” offered Haverdink. “There were no guidelines for the members, other than to be creative.”

The best pitches received awards in three categories. Paul Thompson of Accent Chauffeured Transportation in Santa Fe, N.M., won Greatest Earning Potential for his airport shuttle service proposal; Gina Brennan of Corporate Car & Coach in St. Paul, Minn., was recognized for Most Innovative Product for her hospital transportation service; and Best in Show was given to Joey Allen and Greg Pruitt of Kings Worldwide Transportation in Oklahoma City, Okla., for their Limo Command management service. The LMC Group offered a range of free marketing services to the three winners.

After the fun of the competition, the focus turned to finance, as Solombrino spoke to the group about company valuation. This topic was well-received by all the members, even those who have no imminent plans to sell their business. “Hearing from an industry leader and getting his perspective on the valuation process was very useful to everyone,” said Haverdink. 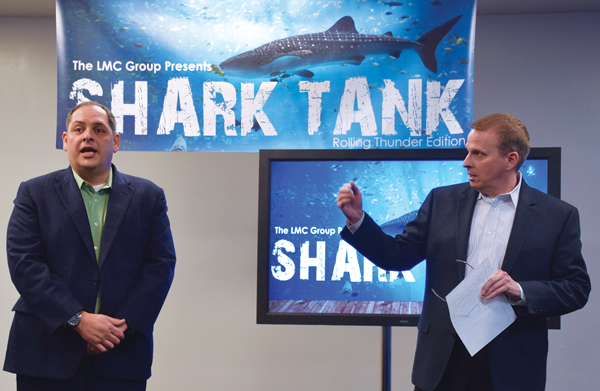 Day two of the event began with breakfast and a session covering marketing, branding, and ad strategy that Carroll presented. Topics included the importance of brand consistency and how to stretch your marketing budget effectively. Rolling Thunder next welcomed a guest speaker to the seminar. Matt Saenger, a senior investment advisor with Memphis’ Green Square Capital, discussed wealth management strategies with the group. “When you come to one of our events, you get not just our expertise, but all of our connections’ expertise as well,” she explained.

Following an on-site lunch, the group held workshops that offered insight into business development, finance, and goal setting. Ultimately, the sessions concluded with a look ahead at future Rolling Thunder events. The group’s next meeting will be held in New Orleans, immediately following the Chauffeur Driven Executive Retreat on May 1-3.

Reactions to the two-day meeting were all positive. Member Laura Canady of CLT Express Transportation in Belmont, N.C., raved, “I brought great information back to my office that was relevant and easily implemented. We had a perfect host, and a group of operators that are second to none; it doesn’t get much better.”

“The personal relationships resulting from this group are by far the best benefit,” said Brennan of her experience in Scottsdale. “Rolling Thunder is like a second family to me.”

Carroll is similarly enthusiastic about the Rolling Thunder group. “As we entered our second year as a benchmarking group, I have been thrilled with the progress we’ve made as a group and proud of the great efforts these CEOs have made,” she said. “Every single member is actively running a busy company, putting in long hours, and traveling extensively for their work. Still, they have taken the time to do the hard work of financial discipline, knowing how important it is for their companies. Each and every member of the group is an inspiration to me.” [CD0316]