Driving Results Heads ­to British Columbia for Its Latest Meetings

Making a stop in CANADA’S picturesque Victoria, British ­Columbia, Driving Results hosted it latest meetings of Women on the Move and Spinning Wheels back to back this past June. From the castle-like Fairmont Empress Hotel overlooking a scenic view of the inner harbor, members of both groups learned and bonded within the marvelous setting of a vacation.

Women on the Move took to the scene first with a warm welcome from hosts Kyara and Ed Kahakauwila of L.A. Limousines in Victoria, who provided fun and relaxation between the group’s knuckling down. They started with a series of presentations and discussions, including one by JRB Management Services owner and Women on the Move co-facilitator Jen Brugliera, who discussed the complicated issue of pricing services. After this presentation and a couple more round-table discussions, the group got dinner and hit the hay for what would be a long day ahead. 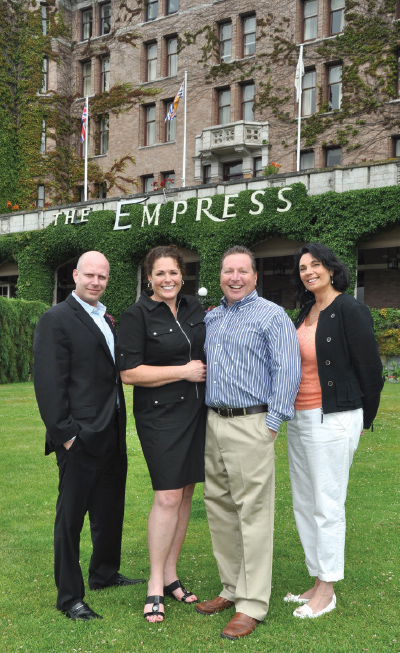 On day two, the group set out for Hatley Castle of Royal Roads University where they were welcomed by their workshop leader, Dr. Jennifer Walinga, professor of communication for the university and principal of Integrated Focus Consulting. Through in-depth and interactive exercises, the group walked away with a good lesson in time and energy management.

Despite the productivity of Walinga’s presentation, the day was far from over. The women left the castle for a tour of L.A. Limousines’ facility and then hopped onto a sea plane for an aerial excursion of the area. The fight was a bit nerve-racking for some, but ultimately a terrific bonding experience. After a smooth landing, the day concluded with a barbeque at the Kahakauwilas’ house. Amid the ambiance of live music and laughter, the party was the perfect opportunity to wind down after a busy day.

“Somewhere between the hints of ­royalty from the castles of Victoria and ­excitement of exhilarating ­excursions, the members of Women on the Move and Spinning Wheels reached new ­levels of solidarity on their memorable ­adventures.”

“I thought they both did a phenomenal job of hosting for everyone that came up there,” says Brugliera of Kyara and Ed Kahakauwila. “They were both very eager to show off their city and make sure everyone had a good time.”

After a much-needed night’s sleep, the group started their final day with some group discussions including one by guest speaker and CD’s own Chris Weiss. The group focused in on Weiss’s presentation topics of modeling chauffeur services as “mobile concierges” and the upcoming Chauffeur Driven Show this November in Atlantic City. Weiss also discussed Uber and its effects on the industry, which gave way to a lively conversation with participants. Another discussion led by Lenore D’Anzieri, managing director of Driving Results and facilitator of Women on the Move, explored the growing trends and practices happening in corporate meetings.

Day one of Spinning Wheels’ meeting started with various presentations and discussions. Among the presenters was Weiss, who stuck around to give his presentation to a fresh audience. Sarah Lane of SEL Conference Services, along with some help from Daniel Melnyk of Anticipate Hospitality Strategy and Consulting, also shared advice on how to better work with destination management companies. The presentation was a worthwhile opportunity for the group to get a different view on an industry they are so fundamentally connected to.

Day two began with a trip to Hatley Castle for the same seminar by Dr. Walinga that Women on the Move had attended just a few days prior. Though this was a repeat of sorts for Walinga, it was no less fruitful or energetic judging by the enthusiasm of Driving Results managing director and Spinning Wheels facilitator Arthur Messina.

“It was eye opening,” he says ardently. “By the time it was done, people knew more about themselves and their leadership skills.”

Leaving the workshop with a feeling of confidence, the group set out for some zip-lining through the pine trees of British Columbia. It was a battle of grit and determination for some, but they all managed to get through the obstacle as a group. Exercises like this one may seem off the wall, but to Messina, they are crucial components to having effective group meetings. “We find that the team-building exercises give people a chance to get out of the office and let their guard down,” says Messina. “But at the same time, they get to know their fellow group members while communicating about business at these events.” The second half of the day was led by hosts Kal and Sunil Sanghera, who took the group through a tour of their own Regent Limousine and then to a spectacular night of fine dining at Sidney Pier Hotel.

The last day of Spinning Wheels’ meeting consisted of seminars along with a repeat presentation by D’Anzieri on trends in corporate meetings and another on contingency plans by Joe Gulino of Gem Limousine. The conclusion was a bit more laid back than the previous day, but equally interactive and informative—perhaps rightly so after such an event-filled few days. Somewhere between the hints of royalty from the castles of Victoria and excitement of exhilarating excursions, the members of Women on the Move and Spinning Wheels reached new levels of solidarity on their memorable adventures. Throughout the week, what were already non-competitive affiliations between colleagues began to look more and more like lasting relationships, and in this business, that can only take you higher.

Women on the Move’s next meetings will be hosted by Mary Paul of Crown Chauffeured Worldwide Transportation this August in Chicago and then by Joe Magnano of CLI Worldwide Transportation in Orange County, Calif., in December. Spinning Wheels’ next meetings will be hosted by Alex Malek of Worldwide Limousine in Miami, Fla., in September and then back to back with Women on the Move’s December meeting in Orange County, Calif., by returning host Joe Magnano.   [CD0813]