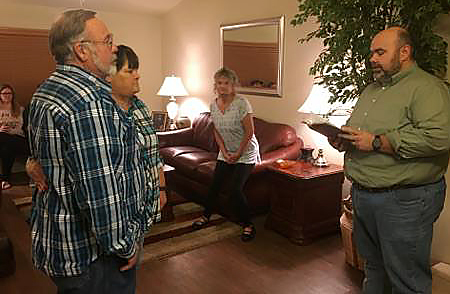 Phoenix — In a truly celebratory new beginning on January 1, 2017, The Driver Provider’s Mary Beall married her fiancé Dan Johnson at their Arizona home.

The wedding seemed like an impromptu event to most of the Johnsons’ eight guests—including Mary’s son and daughter-in-law—who were all emphatically told “to come to the house dressed in jeans and sweats” for a cozy dinner to ring in 2017. The only attendee in on the surprise was Joe Guinn of Limo & Bus Compliance, as Mary tapped the ordained minister to officiate the couple’s low-key nuptials.

“No one had any idea they were being invited to a wedding,” said Mary, who is also on the Chauffeur Driven Charity Committee. “We told everyone that we were just inviting them to a casual dinner. My son laughed when I told him I was getting married right now.”

The couple recently celebrated their two-year anniversary in December, leading to a short engagement that was soon followed by the New Year’s Day wedding ceremony in the couple’s living room.

The entire Chauffeur Driven team extends their warmest wishes for a lifetime of happiness to the newlyweds.