WFLA Introduces New Board and Name 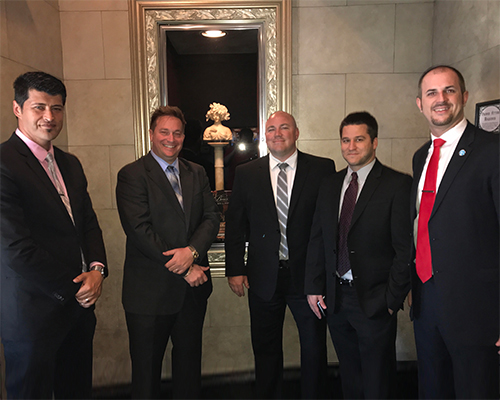 Members of the WFLA board include (L to R): Treasurer Blaze Basevic of President Limousine and Sedan Service, Secretary Justin Nystedt of Crowd Pleaser Limos, President Jeremy Jenkins of His & Hers Limousines, and Directors Matt Clemens of PIC Insurance and Ryan Hilberth of Rental Limo/Book.limo Tampa, Fla. — The West Florida Limousine Association (WFLA), formerly the West Florida Livery Association, recently turned over its board of directors, which represents a mix of familiar and new faces. Starting with re-elected board members, Jeremy Jenkins of His & Hers Limousines will serve as the returning president, along with David Morris of Kings Executive Limo & Car Service as vice president, Blaze Basevic of President Limousine and Sedan Service as treasurer, and Gregg Moulton of Orlando’s Select Transportation as a director.

New additions to the WFLA board include Secretary Justin Nystedt of Crowd Pleaser Limos and Director Ryan Hilberth of Rental Limo/Book.limo. Hilberth joins Matt Clemens of PIC Insurance as a second non-voting vendor board member. Soon after the new board was announced, the group identified a handful of issues to address at the association’s next meeting.

The WFLA board voted previously to drop from seven voting board members to five. The association then voted to rebrand the group with a slight change to the WFLA moniker, swapping the original “Livery” for “Limousine.”

In addition to the slight name change, the WFLA board also decided to acquire wfla.org as the association’s new domain name under the direction of Hilberth. “At our last meeting, we did a quick poll to see how many of our members knew the existing URL for the WFLA and the results were disappointing needless to say. As such, we decided that we needed a more memorable name that would elevate the WFLA as we re-brand.”

On March 29, the Hillsborough County Public Transportation Commission (HCPTC) voted unanimously in favor of reducing local limousine permits by 90 percent for all operators, including full refunds for those who already paid.

“This is a huge victory for us and we’ve waited a long time to level the playing field by getting this to go through,” Jenkins says.

The HCPTC board also voted to allow for controlled surge pricing for special events including airport rides, sports games, and concerts.

Following the acquisition of a new domain name, the group plans to redesign its logo to reflect the name change as well as re-design its website in the near future.

The next WFLA meeting is scheduled for May 17.