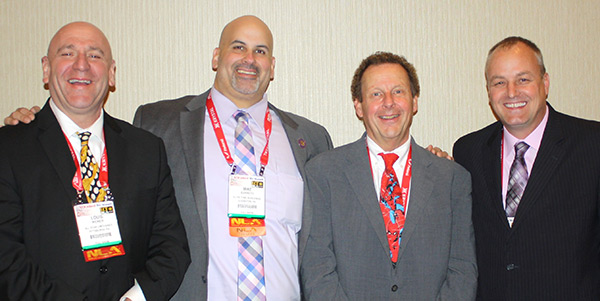 L to R: Louis Weiner of All Star Worldwide Transportation, Michael Barreto of Flyte Tyme Worldwide, Philip Jagiela of PALM Association Management and Consulting, and Douglas Rydbom of Premiere #1 LimousineHarrisburg, Pa. — The United Passenger Transportation Association of Pennsylvania (UPTAPA) held its inaugural meeting May 31 at the Holiday Inn Harrisburg East. A robust group of members from the livery, school bus, ambulance/paratransit, and motorcoach industries helped kick off the debut meeting of this statewide association. The luncheon served as an opportunity to introduce the organization and its founders, while identifying goals for the short and long term.

UPTAPA Executive Director Philip Jagiela, who also serves as CD Industry & Brand Ambassador, called the meeting to order by welcoming the group and offering some background into the association’s concept. After emphasizing the value of a statewide industry, Jagiela then introduced UPTAPA’s co-founders: Michael Barreto of Eagle Chauffeured Services, Doug Rydbom of Premiere #1 Limousine, and Louis Weiner of All-Star Worldwide Transportation.

Barreto was next to address the room, asking each person in attendance to introduce themselves and identify the segment of the industry they represent. He then shared some of the immediate objectives of UPTAPA, including the creation of support committees and establishing a PAC, all the while stressing that there is no desire to dilute the efforts of other associations in Pennsylvania.

Next, Rydbom took the floor, echoing many of the same sentiments as Barreto. The Lancaster-area operator then solicited for potential board members, and encouraged those present to visit the UPTAPA website and apply for membership. Rydbom also made a point of explaining that education will be the key component of meetings and communication between regions will be encouraged. He pointed out that unique sponsorship opportunities are open for companies and vendors.

A short Q&A was next, with many sharing their support for the concept of a statewide association. Vendor member Eric Coolbaugh from Access Commercial Capital was enthusiastic about the efforts made by the founders, sharing his appreciation for the cohesive work environment and the belief that UPTAPA is beneficial to the industries involved.

Jagiela closed the meeting by promoting the UPTAPA website and encouraged attendees to contact him with any needs or questions.

The next UPTAPA meeting is scheduled for Wednesday, July 26, in the Philadelphia region.