In a hopeful and optimistic video to members on April 4, COO and Executive Director Scott Solombrino announced that the Global Business Travel Association’s (GBTA’s) convention, originally scheduled for July, had been postponed due to COVID-19. The convention, fortuitously themed “Together,” will now expected to take place November 7-11 at The Colorado Convention Center in Denver, although GBTA leadership will reevaluate in July based on global conditions at that time. 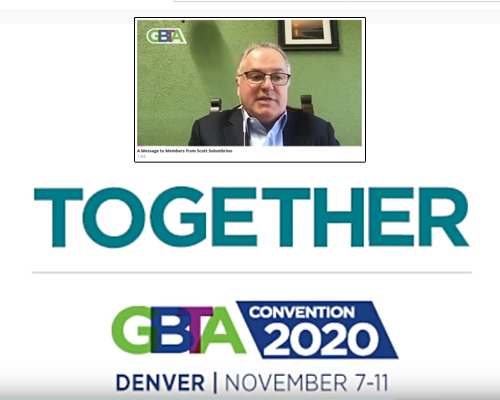 “We never could have anticipated how appropriate this year’s convention theme was going to be. When we picked it [in November], I wanted to send the message that the GBTA has always been about being together, and it was really simple. Who would ever think that we would end up with a pandemic and it would become as ironic as it is today,” Solombrino said.

Reaffirming his commitment to focus on the crisis at hand, Solombrino detailed a number of initiatives GBTA is taking help the many sectors of business travel that the association represents—including chauffeured transportation. Solombrino is the former president and CEO of Dav El/BostonCoach.

“While there’s so much out there that’s challenging us at such a rapid rate, some things don’t change, and that’s the mission here of GBTA. We want you to know how we're going to take care of you. … Let us give you the tools that we have in our toolbox to help make your life a little bit easier,” he said.

Some additional highlights of the video:

The full video message can be viewed at gbta.org or here.