Despite being critical industries, they have suffered unprecedented and catastrophic economic losses over the past eight months due to the drastic declines in job commuting, group travel, and school closures. Unlike other modes of transportation, such as airlines, rail and public transit, bus and vessel industries have not received direct economic relief to date. Many companies have already shuttered and many more are on the brink of closing their doors forever. 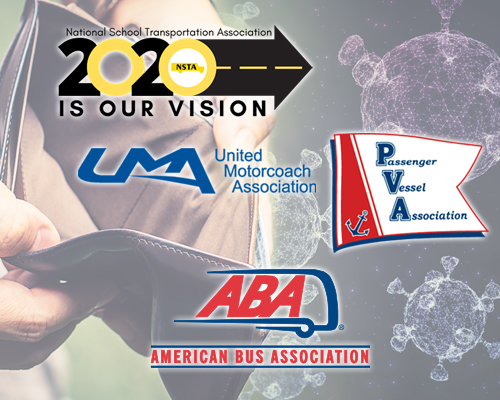 According to the associations:
Prior to COVID, the three industries collectively employed more than 460,000 trained and experienced employees to deliver their passengers safely to and from their destinations. The 308,000 drivers, captains, deck hands and mechanics that have been furloughed deserve relief as much as pilots, flight attendants, airplane mechanics, rail engineers and public transit workers that have already received at least some form of direct support enabling them to keep their jobs over the same time period.

The CERTS Act would create a much needed $10 billion grant and loan program administered by the Department of Treasury to prioritize relief for these employees and assist with expenses related to debt service on vehicles, vessels, insurance, rent, utilities and equipment in order to operate safely for these capital-intensive companies. With 56 bipartisan cosponsors in the Senate and 235 in the House (as of October 2, 2020), the CERTS Act has more support than ANY pandemic relief bill that has been introduced.

The U.S. motorcoach industry provides nearly 600 million passenger trips per year, just under annual passenger trips made by airlines, ensuring vital intercity connections, charter and tour operations supporting critical military and emergency evacuation work along with the travel and tourism industry. The US private school bus industry provides nearly 40 percent of the nation’s school bus service in 200,000 yellow school buses to 26 million children every day that rely on the school bus as the only way to get and from school in the safest way possible. The U.S. domestic passenger vessel industry carries more than 200 million passengers annually and includes ferries, dinner boats, sightseeing and excursion vessels, whale watch and wildlife tour boats, sailing vessels, and small U.S. overnight cruise ships.

ABA, UMA, NSTA, and PVA urge Congress to swiftly enact the CERTS Act to preserve jobs and these critical industries.