Orlando — The Greater Orlando Limousine Association (GOLA) launched a billboard campaign at the end of September. Its members are aiming to raise awareness about the dangers that TNCs present to public safety by operating illegally and shirking the regulations that traditional transportation companies must abide by. 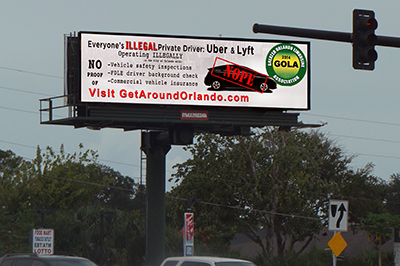 President Cliff Wright of Royal Transportation Group says that the association’s messages are on 28 electronic billboards throughout the Orlando area and appear “roughly 150,000 times a day.” So far, the billboards—which started running the same day that local media outlets reported that an Uber driver had been arrested for assaulting a female passenger, who had recorded evidence of the incident—have garnered the association quite a bit of attention.

“We’ve had a great response so far. A lot of people have seen them and we’ve been doing a lot of interviews,” Wright says. “We’ve picked up a few new members because we put the GOLA logo on the billboards. A lot of people didn’t know there even was an operator organization here.”

GOLA also has recently partnered with the Florida Livery Association (FLA), so anyone who joins the regional association will automatically become a member of the statewide one. Wright says that the partnership was a long time coming since the two groups have frequently worked in tandem before, and was inspired by the two organizations both heading to Tallahassee last year in an effort to combat Uber.

“The FLA is going to keep pouring money into this fight. It’s hard asking single operators to keep throwing in money: We decided it would be easier if we could work it out so all of our members could become FLA members so the FLA has a steady contribution from us,” says Wright.

GOLA has also found an ally in Mears Transportation, which handles the majority of Orlando’s tourist transportation.

“Right after our September meeting, we went to a city council meeting about TNCs and, between us and Mears, we forced a lot of pressure on the city to have another public hearing, which will be October 13,” says Wright. “Everybody wants to voice their opinions.”

While the fight to get TNCs on the same playing field as regulated livery companies has been a long and frustrating one, it has highlighted the necessity of traditional operators forming a unified front.

The next GOLA meeting will be October 14.