Des Moines, Iowa — Majestic Limo & Coach owners Scott and Melissa Woodruff are pleased to announce that their family has grown after the adoption of two girls. 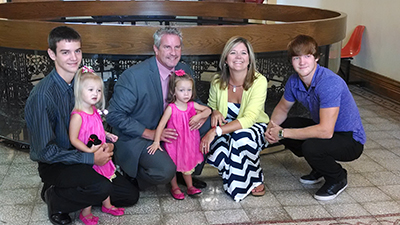 The Woodruff family (L to R): Nathan, Zyla, Scott, Blayce, Melissa, and Adam As a favor to relatives of Melissa’s, the Woodruffs began taking care of Zyla and Blayce, now 2 and 1 ½ years old, respectively, when the girls were still infants. The couple found out that they would be able to keep the girls in December, and the adoption was made official the end of July.

“They are amazing,” Melissa says of her daughters. “They’ve brought so much joy to our lives and they really make you stop and think about the important things in life. Sometimes we work too hard and need to slow down and appreciate our families.”

Melissa has indeed been learning how to balance the demands of being Majestic Limo’s event coordinator with raising two young girls.

“I work from home, which is nice to be able to do,” she says. “I play Mommy on Mondays, and then the girls go to daycare Tuesday through Friday so I can stay involved in the company.”

The Woodruffs’ two sons, 18-year-old Adam and 15-year-old Nathan, have taken to their roles as big brothers almost instantly, according to Melissa.

“Adam and Zyla are just two peas in a pod—they connected right off the bat,” she says. “All four of them get along just great.”

Aside from “all the fun stuff like hair ribbons and necklaces” that come with having girls, Melissa says that she already knows that bringing up two daughters will be quite unlike raising two sons. But she hopes to offer the same bright future and loving environment to all four of her children.

“I just hope that we can be great role models and teach them to grow and learn from their experiences so when they go out on their own they are prepared,” Melissa says. “I believe God had a plan for these two little girls and we are very thankful for the opportunity to be the parents we think these girls deserve.”